One hunting license cost $220.00 USD for two caribou. The cost of the whole hunt was $1000.00 USD. That paid for 4 days of caribou hunting and 3 nights in a heated building, with heated restrooms and flush toilets (no showers). We furnished our own meals. The hunting takes place east of James Bay, a part of the Hudson Bay, where the George River herd overwinter. There is over 200 miles of hunting area, from the Polaris River eastward to Labrador border.

You hunt by driving the road eastward from the hunting camp and when you spot a good caribou, you stop, get out, load your gun and shoot it. Me and my hunting partner ate and left early on the first morning. After driving for a while, of which we saw lots of caribou but no good set of antlers, we came to a well traveled path about 20 miles from the hunting camp. We decided to park close by and wait for a herd to migrate through. Caribou migrate by following the leader, making real worn paths. We waited for about 15 minutes when we heard the clacking of hoofs on the rocks which you could hear off at quite a distance. That sound was to get you all geared up so you would have a good case of buck fever. They finally arrived at the road we were sitting beside of, about 20 caribou in all, all milling around at first. I saw a decent one and decided to make it caribou # 1. Now I was in phase 2 of hunting…butchering. I field dressed the animal and as I was just finishing up on number 1, I saw another caribou with a much better set of horns. I grabbed my gun, and proceeded to shoot caribou # 2. I now had two on the ground. Wow, that was fast! I can go home now. Well not quite so fast. I field dressed animal # 2 in short order. My companion had field dressed his caribou as well. We were ready to go back to the hunting camp to finish butchering the three caribou. Before we left home for Quebec, I made a winch type apparatus (that fitted in my trailer hitch) to hang my caribou up, to work on it. All the hunters at camp wanted to buy it. I should have made several to sell! It was approx. 25 degrees and snowing with snow about 25 inches deep. They kept the roads well plowed.

After about 3 days of hunting, the rest of the party was ready to start home. On the way home, near Matagama, Quebec, the other truck had a mechanical problem and his passenger had to get in with us for the remainder of the trip home. Plus we had to transport their caribou (meat) with us. That took some explaining to do to the game officials. We had too many caribou for the number of hunters. The owner of the truck stayed in Matagama and drove home after the truck was repaired.

As I wasn’t quite satisfied with the two caribou trophies I got on my first hunt, I decided to go back the second year. As it were, I was only able to get a caribou cow the second year. I had the hide made into a rug to hang on the wall. Caribou cows have antlers. 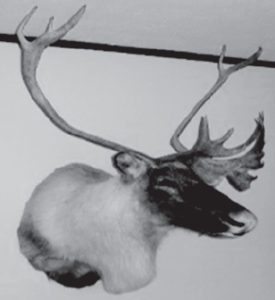 This subspecies of Caribou usually do not produce the lavish set of horns as the Barren Ground Caribou in Alaska do. Mine had a beautiful set of double shovels.