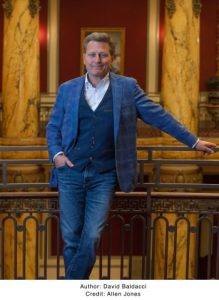 Novelist, David Baldacci, a Virginia native, has spent nearly his entire life in his home state. Like Adriana Trigiani, he is of Italian decent–his ancestors immigrated to the US from Tuscany. He was born in Richmond in August1960 and grew up there. After graduating from Henrico High School, he earned a B. A. in Political Science from Virginia Commonwealth University.  He also holds a law degree from the University of Virginia; after his graduation, practiced law for nine years in Washington, DC.

Baldacci expresses a life-long love for writing; he said, “I live to write and write to live.”   He began to write stories as a child:  his mother gave him a notebook in which to record them.  Later, when he publically thanked his mother for helping to initiate his writing career, she admitted that she gave him the notebook to keep him quiet; every mom, she says “‘need a break now and then.'” For more than two decades, as an adult, Baldacci continued to write without much success; however, when it came, it was phenomenal.

While practicing law in DC, Baldacci began to write a novel, Absolute Power,  completing it in three years. Published it in 1996, it immediately became an international best seller. Absolute Power reflects the Clinton era in its content.  A US president is having an affair with a woman who dies in an accident:  his intensely loyal Secret Service agents are willing to commit murder to cover up her death. The novel became a feature film  in 1997 with Clint Eastwood as both director and star. Gene Hackman also had a role in the movie. Since that early success with Absolute Power,  Baldacci has published over forty novels for adults; his works, translated into over 45 languages, have sold more than 150 million copies in 80 countries around the world.  He has also written seven novels for young adults.

Baldacci, then, is another writer of popular fiction in the mode of John Grisham with tales of topical interest: detective stories, courtroom drama,  murder, and political intrigue.  I have read only two of his novels, one in the early 2000s when I served as a fiction judge for the Library of Virginia’s annual award (He didn’t win the award) and most recently, King and Maxwell (2013).  Between 1996 and 2021, Baldacci wrote thirteen “stand alone” novels and novellas. He has also written novels in series that feature the same characters; for example, there are six novels in the King/Maxwell series. One Web reviewer suggests that the King and Maxwell novels be read in the order in which Baldacci wrote them:  Split Second, Home Game, Simple Genius, First Family, The Sixth Man, and last, King and Maxwell.  TNT television launched a series based on the characters in 2013.  Starring Jon Tenney as Sean King and Rebecca Romijn as Michelle Maxwell, the series ran for only one season. Baldacci was a consulting producer on the series. Two more of Baldacci’s novels have become movies.  He wrote the screenplay for the film version of Wish You Well, which was shot in southwest Virginia, with, among its stars, Ellen Burstyn. The Hallmark Channel adapted a version of The Christmas Train in 2017 for a Hallmark Hall of fame feature presentation.

Like Grisham and Trigiani, Baldacci has become wealthy from the success of his highly popular fiction and, like them, he has shared his money. He and his wife co-founded the Wish you Well Foundation that supports family and adult literacy programs in the US.  One branch of the organization, Feeding Body & Mind, has distributed more than one million new and used books to needy families.  Baldacci also became involved with the National Multiple Sclerosis Society after his sister was diagnosed with the disease. Baldacci has served on the Board of Visitors at his alma mater (VCU), and he and his wife have donated $1.1 million to VCU for a political science scholarship.

King and Maxwell is probably a typical Baldacci novel. A reviewer for The Providence Sunday Journal praised it:  “King and Maxwell continues to push the plot envelope, raising the stakes both structurally and emotionally. . . . Baldacci is at the height of his power here.  A wondrously constructed and rivetingly told tale.”  Baldacci’s detectives, Sean King and Michelle Maxwell, like most other fictional sleuths, have their origin in Edgar Allen Poe’s “Murders in the Rue Morgue” and A. Conan Doyle’s Sherlock Holmes tales.  Baldacci’s pair, however, seem to possess about equal intelligence, though Maxwell is the physically stronger of the two.  The novel, set in the present, deals with a scheme of revenge involving the theft of one billion Euros meant to subsidize a rebel force in the Mid-East.  The fall-guy in the scheme is Sam Wingo, a career-soldier, who tries to deliver the money to the rebels, but is waylaid in the process.  King and Maxwell get involved through Sam’s son, Tyler, who receives an e-mail from his father after the government has announced his death during the mission. Violence and bloodshed permeate the narrative with plot riffs that defy belief. At any rate, if you like topical fiction with plenty of action, Baldacci provides it.