After a two-year pause, the 30th annual Brocks Gap Heritage Day will be Saturday, May 7, 2022, at Broadway High School, Broadway, VA, 10 a.m. – 4 p.m. Over 150 posters from our vintage photograph collection feature families, churches, communities, schools, and other topics. Researchers can use my personal library of family, local and regional histories. Other genealogists and local historians will be there to share their material and gather new information. This is a free event open to the public. Donations are welcome to purchase memorial stones for family cemeteries. New books will be available for purchase.

Three programs this year are:

12:30 “George May: from Ireland to Brocks Gap—How DNA and new research led to a revised picture of George May and his family” by Diane Langston

2:00 “The Forgotten People of Rockingham County” by Rev. William Zirk

**The school’s safety rules will be in effect.**

For more than ten years, Joe T. May and his sisters Lois May Rhodes and Phoebe May Orebaugh have researched the military service of local men during World War II, particularly those killed in action. This year’s program focuses on the experiences of Harrison May from Criders, who landed on Omaha Beach during the invasion of Normandy on D-Day, June 6, 1944. Joe T. May is a graduate of Broadway High School and Virginia Tech and founder of EIT, a Sterling-based electronics manufacturer. He holds over twenty patents in the fields of electrical and electronic engineering. May is also an avid aviator, holding licenses in both fixed and rotary wing aircraft. From 1994 through 2014 he served in the House of Delegates representing the 33rd District.

For generations, researchers thought that early Brocks Gap settler George May was a Hessian soldier from Germany, fighting with the British during the American Revolutionary War. Heritage Day’s speaker Diane Langston used DNA results and other research methods to discover new information on George May and proved that he was from Ireland, not Germany. Langston is a member of the DAR, the Virginia Genealogical Society, and the Genealogical Research Institute of Virginia. She has a B.S. degree from JMU in Library Science and Educational Media with a minor in History and a M.S. degree as a Reading Specialist from Longwood University. She was a school librarian for 36 years before retiring in 2019.

A Rockingham County native, Rev. William L. “Bill” Zirk will speak about the history of the Alms House, commonly known as the poor house, of Rockingham County. He is uniquely qualified for this topic, since his grandfather William A. Zirk, was superintendent of the Alms House from 1945 until his sudden death in November of 1952, and his father, Berlin M. Zirk, Sr., was superintendent from 1952 until January 1956, when his health caused him to retire. Thus, Bill literally grew up in the Alms House.  Bill graduated from Turner Ashby High School and from Bridgewater College. He taught middle school for thirty years and retired in 1993. An ordained minister, he served as a Church of the Brethren pastor in several small churches in Rockingham and Shenandoah Counties from 1961 until 2005. He founded the Shenandoah County Credit Union and served as president of the Board of Directors for twenty-three years.

Making their 30th appearance at Heritage Day, Rocktown History (Harrisonburg-Rockingham Historical Society) will have local history books for sale on a broad range of topics. This year representatives from Plains District Museum will be on hand to share information about their activities.

Heritage Day tombstone donations have helped preserve twelve Brocks Gap family cemeteries. Many graves in these small plots had no tombstones, only simple rock markers and were in danger of being destroyed. In the last 30 years, we recorded locations of these forgotten cemeteries and researched names and dates of those buried in them. Last year, Joe Adolph began recording the GPS locations so they can be mapped precisely. This year we plan stones for the Roadcap (Fulks Run), Shaver (Criders), and Fink-Moyer (Bergton) cemeteries. Costs are about $900 per stone. Donations will be accepted at Heritage Day.

Since 2020, I completed two new books: Portraits of the Past: Bergton and Criders Communities, 1903, a 127-page book with family photos by traveling photographer J. M. Hill of Bridgewater, and African Americans in Brocks Gap, Rockingham County, Virginia, a history of enslaved and free African Americans in the Gap. Both will be available for sale along with Lewis Yankey’s books and others. 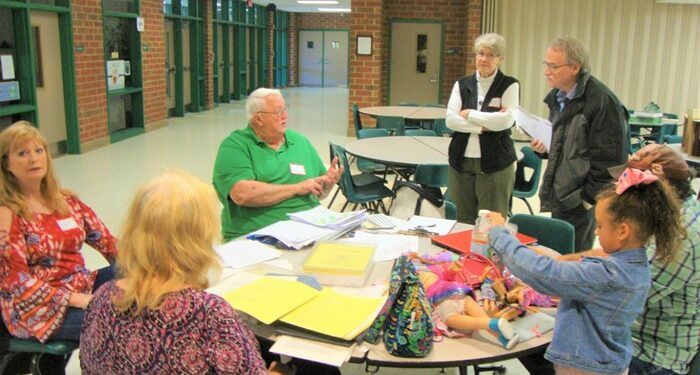