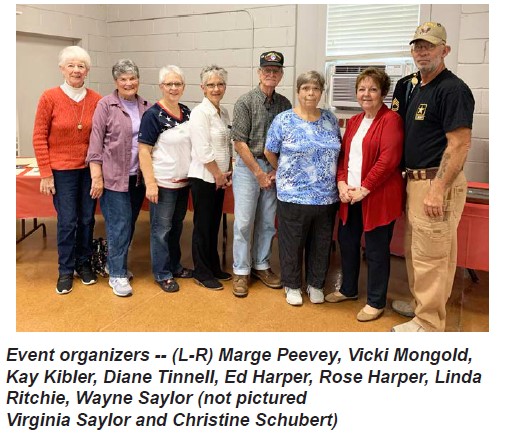 On November 12, there was a celebration of continuation for Chimney Rock VFW Post 9660. The Post combined the celebration with Veterans Day, Post 9660’s 75th Anniversary and the Auxiliary’s upcoming 75th in May 2023, which happens within the VFW calendar year. We had a display of past and present veterans from WWI, WWII, Korea and Viet Nam. The posters were loaned to us from the Turner Family. The committee and all helpers put together a beautiful display of things done by both the post and auxiliary. Some of the displays wouldn’t have been possible if it hadn’t been for Virginia Saylor and Kay Kibler and their collection of photos and memorabilia. There was a display of Past State Auxiliary President Bernice Kline Conrad. She was a charter member and went on to become State Auxiliary President and National Chief of Staff.

The Post’s 75th was on Sunday November 13th. The commander of the Post Ed Harper Sr was presented with a citation from the State of Virginia VFW for their 75th. The citation was presented to Commander Harper by State Jr Vice Commander Rubenstein. The post has a member that lives in Tennessee and he came to the celebration. The celebration was well attended, about 50 or so people, this includes guest and members, that visited the Post. The Auxiliary, which put this on in recognition of the Post and Veterans, served finger foods of party tray, chicken salad sandwiches and country ham rolls. We had 2 cakes, one celebrating Veterans Day and the other the Post and Auxiliary 75th Anniversaries. Everyone seemed to enjoy themselves and spent a lot of their time looking over the displays and conversing with other guests.

Thanks to everyone who attended and to those who helped make it all possible. Thanks to John Harper who came back and oversaw the food and drink tables. Thank you and Happy 75th Anniversary.

More to come in the May issue about the Auxiliary’s 75th Anniversary.