Christmas Memories from the Valley 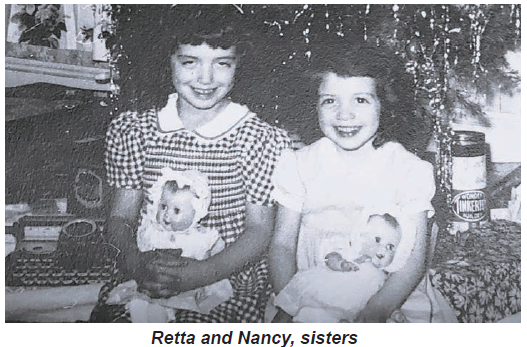 My dear Mother-in-”love” shared this thought about Christmas. “Every year is different! Enjoy each one, and be grateful for what you have and who is with you!” Today, we call this “living in the moment.” This advice saved many holidays when I caught myself focusing changes or unmet expectations. For Christians, it is the celebration of Jesus’ birth and all the promises that Gift gives us. It is also a time of reflection on years passed and a time to renew friendships and offer kind words to those who need them.

I want to take you back to a simpler time. It was before fancy planning journals or electronic reminders of what you should do daily.

While Fathers concentrated on the endless wood supply, some were able to hide a woodcraft project in the barn, and others looked around for something they could sell to secure a little cash.

With some exceptions, most of the Christmas gifts and cooking fell to Mothers. Many began their Christmas knitting and other handmade projects and tucked them in the bottom of their sewing baskets away from prying eyes. The gifts were more practical and fewer during the 30s and 40s. Mittens, socks, hats, and scarves would replace the old as well as for growing children.

My dear Mother remembered lean years when a coloring book with a small box of crayons was a big deal. A little candy in her stocking was special. That may be why the gifts under our tree appeared to be an avalanche of presents. Mother told us that Santa brought the presents, but she and Daddy had to pay for them. I don’t recall asking for anything. But I loved to pour through the store catalogs when they arrived.

I have compiled Christmas memories of preparations and the big day from those interviewed for our local lore books, available at J & B Country Store in Broadway.

Frank Mitchell shared that in the months before Christmas, he and his siblings would crack black walnuts and sell the nut meat. They put the pennies aside for Christmas. His Mother made all of his sisters’ clothing. Frank remembers the year she surprised him with a special shirt.

Marium Crider Selke remembered the excitement of Christmas that the cold weather brought. The children made decorations for their classroom tree and practiced for their program presented to family and neighbors. Every child, no matter how small, was given a part. After the program, the teacher would present each child with a gift of hard candy like a peppermint stick or candy cane.

Lucille (Hoover) Moyers recalled going to the second floor of Whitmore’s store to see Santa Claus. Her standing request was for a doll. Santa never disappointed her.

At Christmas one year in the 50s, Whetzel’s Meat Market designed a promotion that caught the attention of Phyllis Rothgeb Fidler and her cousin, Lucille. If they collected enough Dr. Pepper bottle caps, they could each win a lovely doll with a porcelain-like face, cloth body, and soft plastic arms and legs. They coaxed, encouraged, and begged friends and relatives to drink Dr. Pepper. Their persistence paid off, and before the advertising campaign ended, both girls had brand-new dolls.

At Christmas, Harold Wood and his friends entertained the town with an old German practice called “bellsnickeling.” Mr. A.W. Whitmore, Sr. allowed the young people to borrow old clothes that no one had bought from the store. The group dressed up and painted their faces so their neighbors wouldn’t recognize them. They traveled from house to house, staying until someone identified them. Then they moved on to another home. Often, they were offered refreshments for their “show.” Harold remembers that, on many occasions, they would see another strangely dressed group of young people on the porch, ready for their turn at “bellsnickeling.”

For Nova Fulk, one favorite holiday memory was when she was only six. It was at the Mt. Carmel United Brethren Church Christmas service. Unlit candles and pretty decorations adorned the great tree. But what caught her eye was a large store-bought doll. She wondered who the lucky girl would be to receive that splendid doll. When they handed out the gifts, the doll was brought to her. As an adult, she wondered how long her grandfather had to work to buy it.

For Beck Whitmore, the fifth of nine children, Christmas was a time of long hours at his father’s store. They worked up till Christmas Eve. The store was closed on Christmas Day, but they returned to work the next day unless it was Sunday. “Our house was on the corner where the Post Office is now. We always got toys, of course, and we received a bike to share one year.”

Beck’s sister, Genevieve Whitmore Van Patten, was the 6th child of their family. “At Christmas, each child could ask for one gift. If you asked for skates, you wouldn’t get a doll. When I was a teen, I began to decorate the front door. We always had many sleds, some long enough to hold three children.”
Evelyn (Whitmore) Branner, the oldest sister, trimmed the tree. They were so busy with the store that they were usually late buying the tree from the fire department lot nearby. The tree sat in the corner of the living room. It held clear plastic ice cycles and lead tinsel. On Christmas evening, all the children would gather with their families to enjoy a special time together, including a treat of finger foods.

Sandy Mongold’s Dad, Dow Souder, made a wooden tree about 5’ high. He covered it with foil and added chicken wire. Then Dow placed greenery in the open spaces. A spotlight highlighted its beauty on their porch on “The Bluff” in Timberville.

Bob May’s grandmother, Emma Swank Fulk, owned the third schoolhouse and resided there for many years. Bob recalls one Christmas when the family went to Emma’s house.

There was a beautiful Christmas tree at the top of the stairs at the main entrance. His grandmother had cut out a picture of a chicken from a magazine and hung it on the tree. Before they left, she gathered all the grandchildren around her. She took down the picture of the chicken and said, “Remember, pennies make dimes, and dimes make dollars!” With that, she turned the picture over, and there was a dime for each child taped to the back. She gave us each a dime, and with that enlightening advice, this frugal woman taught us an important lesson.

The Ritchie Twins Jean Sager and Jane Halterman shared with me years ago their precious memory of sitting at the top of the stairs on Christmas morning, waiting till they could go downstairs. They recalled hearing someone dropping nuts into their stockings. They had to wait till Daddy started the coal furnace. They adored their older sister, Ellen Ritchie Garber, and remembered how grown up she was and much more patient than they were.
June Kirkpatrick Bare was the thirteenth of sixteen children. Christmas was special because they usually had fruit and candy. They made their ornaments from scrap pieces of foil. She strung popcorn and wrapped sycamore balls with foil.

James “Junior” Stepto of New Market looked forward to the Christmas program at the Manor Memorial United Methodist Church. It included a play and Christmas music. It became so popular that they eventually moved to the town hall because they needed the space.

Ethel Rhodes was in the second grade when she encountered her first Santa Claus. He made his arrival known with a loud thud in the hallway, wearing heavy boots. The children were delighted when Santa entered the classroom and presented each child with a treat of candy, probably purchased by their teacher. Years later, she assumed he was her teacher’s brother dressed in a Santa costume to surprise the children. Ethel explained “Santa” wasn’t big back then. We didn’t even have a Christmas tree in the 1930s.

JoAnn Cromer Gordon was the sixth of thirteen children. She recalled one particular Christmas when the children received a bike to share. The older children learned to ride first; the younger ones would learn later. It was a well-used bike, and the children quickly learned how to patch a tire. The few dolls they had were handmade by their busy mother. She used cotton for the body and head, then embroidered a simple face and hair. As the older sisters outgrew this pastime, they kindly presented their doll to a younger sister.

I hope you will share your Christmas memories with your family this year. A written or recorded account is best for future sharing. This gift costs you nothing, just a little time, but it will bring joy for years to come.

All Aboard the Agri of Virginia Train