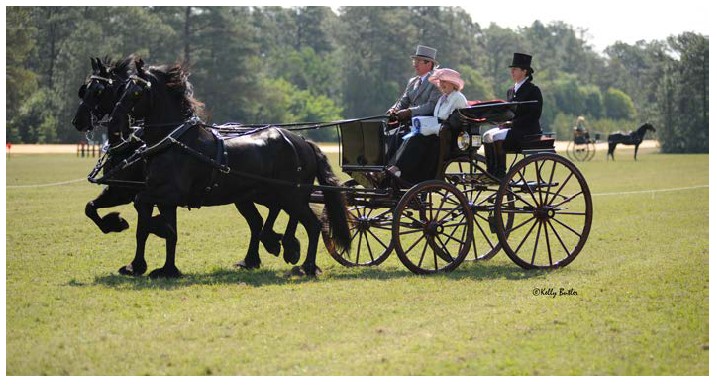 Broadway got lucky when Tom Burgess decided to relocate his veterinary office right here in town. Back behind Domino’s Pizza and North Mountain Clinic, the clinic can be found next door to Dr. Harris’ dental office.

Although most pets are less than thrilled about going to the vet, the office is bright and cheerful, with a welcoming staff.

Dr. Burgess’ wife, Gloria is a licensed vet tech, with a degree in education, a master’s degree in Counseling, and is the office manager. They met in 1974, in Woodstock, in a veterinary office where Dr. B worked. Gloria had come in, they met, he asked her out a short time later, married in 1977, and the rest is history!

Originally from West Virginia, Tom Burgess was always interested in medicine. He preferred working with animals over people. Gloria always had border collies trained with sheep and competed with them as working dogs. Although they don’t have any dogs now, (only horses, 70-80 head of cattle, and cats) Gloria says they will again!

Dr. B first worked at that vet office in Woodstock, VA where he met Gloria, then on to Ashby Animal Clinic. He started his practice in Bridgewater in 1981. After selling his practice there, he realized he missed the clients and their pets, and came back to Broadway to look for a location to start up again. When he sold the Bridgewater practice, it was sold with the proviso that he could not start up again within a 10-mile radius of his old practice. Broadway was the perfect area. There are still many of his clients who still come from Bridgewater and Harrisonburg. He says, “We have a good time. I enjoy my clients!’ With his affable manner and infectious laugh, it is easy to see why!

For a while, after working mostly with large animals, he developed quite an equine practice, and at that time, was the only one in the area concentrating on horses. continuing it for a while after the move to Broadway. The large animal calls now take away from his present small animal practice, and he doesn’t expect his techs to have that added workload of farm calls. Still, the occasional trailer will pull up with a horse that needs to be seen, or some sheep or goats needing inoculations.

The is a hint to Dr. Burgess’ other passion, seen in photos around his exam rooms at his clinic. In his off time, he is quite involved in his driving horses and his carriages. You may see him from time to time, out and about in Bridgewater, with his Friesians and a carriage. His fascination with carriages started long before he had his own horses! That is really putting the cart before the horse! 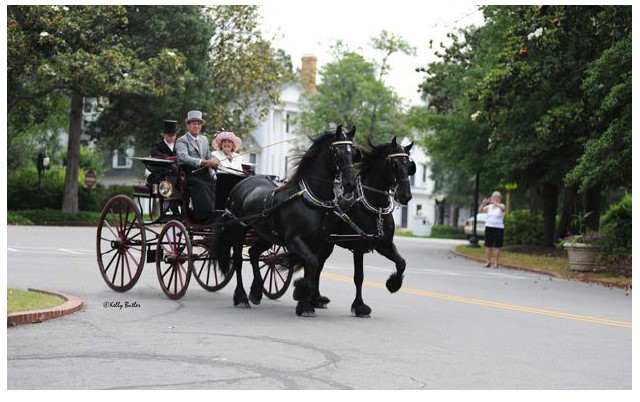 For a while, Dr. B had 2 carriages in the garage, buying his first one from media billionaire John Kluge in Charlottesville, who had an extensive collection that was being dispersed.

At the time the doctor had Saddlebreds, which he kept in Kentucky, and he would travel back and forth for shows. “There was a reason for that. I did not compete here against my clients.” He would show down there, in the Carolinas and 1 time a year at the Saddlebred show in Lexington, VA.

Eventually, the Saddlebreds were let go, and replaced with a team of Friesians. Once a year, Dr. B shows overseas. He has competed in the big Royal Windsor Horse Show at Home Park, Windsor, England. He has a friend there who leases him the horses and carriages to use in the show. To take his own horses would be quite expensive, costing $5,000 each way – for 1 horse!
Dr. Burgess’ collection of carriages is now up to 30 – and he has one in Belgium, that he will get stateside at some point! “Carriages are a work of art!” he says.

He drives primarily pairs. He does drive 4 in hand, but not in shows. One of the groups the doctor belongs to is the international 4 in Hand Club, where the members drive for their own enjoyment.

When he competes, competition classes are divided into singles (1 horse), pair, tandem (one in front of the other), unicorn (2 with 1 in front), and 4 in hand. The entries are also judged on handling skill and dress/turnout. There are also dressage competitions for carriages.

Driving competitions were developed by the Duke of Edinburg in England, who later wrote a book about it. Prince Philip took up carriage driving in 1971, when, according to an article in Britain’s Page Six, “a dodgy arthritic wrist forced him to stop playing polo.” There is a 3-day event for carriages, Dr. B competes there in pleasure driving, a 1-day event.

The horses he leases in England, are owned by a man there who has a carriage business. Dr. B got to drive around London, past the Palace, to Harrods, and all over London- in sort of a test drive to prove that he was worthy of leasing the man’s horses! He passed! Seeing carriages in London is not uncommon- there is a postal run between Buckingham Palace and St. James’s Palace, using a horse drawn messenger brougham carriage, bringing paperwork between the two palaces.

Dr. Burgess met Prince Philip through the Windsor competition. The Queen came all the time to watch the show at Windsor. While standing along the ring watching the competition one day, someone Dr. Burgess knew, asked him if he had met the Queen yet, and brought Dr B over and introduced him. The Queen had her ponies in the ring at the time, so they discussed that and talked about their conformation.

When she had her 50th anniversary, the spectacular gold Royal Coronation Coach was used in the procession. The Queen told Dr. B that it was terrible to ride in, very uncomfortable and swayed. Terry Pendry , her head groom, told her the carriage had been fixed and no longer sways. The Queen said but now she was no longer allowed to ride in it! Dr. B said she had a twinkle in her eye and loved her dogs and horses. Every year that he went to the Windsor show, he would run into the Queen and chat. There was the Queen, the institution, and then the Queen, the horse person. “She, as the Queen, had to do her duties, but when it came down to her horse work, she was a regular person. Horses do that.” In his showing career, Dr. Burgess and Gloria have rubbed shoulders with the rich and famous. But, as he says, “the horse is a leveler’ – a common denominator.

“The Queen had always been very gracious to me, “even kidding him one time, when she had tried to go to town and the group his was driving with had been “in her way”! She also commented that someone had driven on her grass!

The Windsor show still goes on, there may be some changes, since the Queen is gone. Equerry Terry Pendry rode with her all the time. Terry could be seen at the funeral with the Queen’s pony.
The only ones in the Royal family who drive now, are Prince Edward’s wife, Sophie and their daughter, Lady Louise. Lady Louise was taught by her grandfather, Prince Philip, to carry on the tradition with his horses. “They are a very nice family and are in charge of the Windsor show now.” said Dr. Burgess. Although, since the Queen’s death, plans for the next show have yet to be decided.

Dr. B also belongs a local group in England, British Drivers Society, whose members drive an 11-mile route around the park, led in the past by Prince Philip, now led by his granddaughter, Lady Louise.

Dr. Burgess will continue to attend as long as he is able.

He is a member of the American Driving Society and The Carriage Association of America. Some of his carriages have gone with him to a car show in Lexington, Kentucky, where there is a carriage class. He has won twice and also judged there. It is for static, not moving, vehicles.

Carriage repair/restoration is kind of a lost art. There are some Amish who will repair and restore. He took a carriage to the FFA in Bridgewater, in the hopes of starting a restoration competition, similar to the tractor restoration. Covid hit, and the idea fell by the wayside. Burkholder Buggy Shop is another local place for repairs. That has been a real help to Dr. and Mrs. Burgess in getting work done. Restoration was usually found out of state.

His two pair of horses at home, are 11 and 22. He still drives them, “the older horses are in the lead, so they are not pulling anything, they are just trotting along. I take the pressure off them, with the younger pair in the back doing all the pulling.”

When not working at his Broadway Veterinary Clinic, or traveling to competitions, the good doctor may be seen driving one of his many carriages around his 130 acres in Bridgewater. Drive slowly, and wave if you see him!

Unique Retreat on the Creek