Eldon Layman was introduced to me at a meeting of the Valley Association of Retired Educators (VARE) back in 2009 when I retired. (An earlier article in the Chimney Rock Chronicle related the story about the founding of VARE by Edith Good and other retired Virginia Education Association members including Eldon.) One of the things I learned about Eldon back then is that he had compiled a book with information on each VARE member, a directory for members who might want to learn about or contact others.

Eldon grew up on a farm about a mile west of Lacey Spring; he was born Eldon Jacob Heatwole on June 16, 1933, to Addie Lee Layman Heatwole and Marvin Weaver Heatwole. He was related to the Lincolns through his mother. His mother and grandmother died of pneumonia in 1935, and he was adopted and raised by his uncle and aunt Ray Herman and Elsie May Stearn Layman. He found out he was adopted when his cousins told him; he was ten years old and asked his “mother” if it was true. She said it was, but it didn’t matter; they loved him. 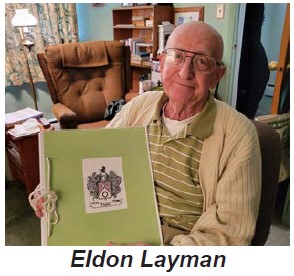 A student at Linville-Edom School from grade one through grade eleven (schools at that time had no kindergarten or twelfth grade), Eldon graduated from the school in 1950 and joined the Navy. Eldon served on the USS Randolph in the United States Navy from 1954 to 1956. He was a yeoman YM3 who worked in an office. He served in the Navy for four years during the Korean War, and went back to school in 1956 at Madison College under the G. I Bill. Eldon graduated from Madison College in 1960 with a B. S. in Education, ten years to the day after he got his high school diploma! He earned his M. S. in Education in 1968. I learned about Eldon’s Linville-Edom experience when I published an article about Shenandoah County’s 250th anniversary and included a photo of Doris Lam Combs with a photo of a history of education in Shenandoah County compiled by the Shenandoah County Retired Educators Association (SCRTA.) He wrote to me and explained the connection; he and Doris both attended and graduated from Linville-Edom! Small world!

Starting his career in education at Fulks Run Elementary in Rockingham County in 1962 with a large class of 40 students! In 1965, he applied to teach 5th grade at Weyers Cave Elementary in Augusta County, and says that Andrew Thomas, the 6th grade teacher at Fulks Run told officials in Augusta County that Eldon prepared the 5th graders for their next grade better than any teacher had for years! He taught at Weyers Cave in 5th grade for 8 years, then taught 4th grade for 6 years. After 14 years, Eldon transferred to the new Gordon Stewart Middle School at Fort Defiance where he taught World History to 6th graders for ten years. Eldon retired in 1993 after thirty years of teaching, 27 in Augusta County and 3 in Rockingham County. (He taught Chimney Rock Chronicle columnist Patricia Turner Ritchie in fifth grade during the 1962-63 term!) 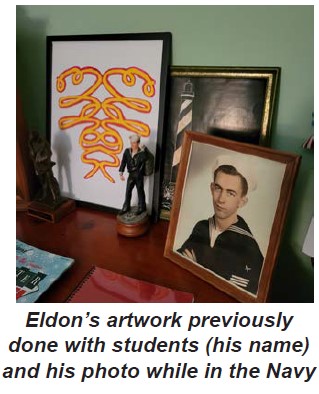 After retirement, Eldon didn’t stop working! He compiled numerous books, published by Garrison Press. One book was about his naval career. In 1993, about a dozen Linville Edom graduates revived the Linville-Edom Alumni Association, and Eldon was elected president. The association began having all-class reunions in years ending with a 3 or 6. The last one held was in 2003 to celebrate 100 years of the founding of Linville-Edom. Due to the pandemic, the association stopped meeting in 2021. In the fall of 2021, Eldon published a book about Linville-Edom School which included history, newspaper clippings, snapshots, and more with a red cover with the school emblem in the center outlined in gold. Red and gold were the school colors. He also included all of the newspaper articles on the possible closing of the school in recent years due to sewer problems. He still has the books for sale for $20 (I purchased one when I visited him recently; what a treasure trove of information!) Many of the photos were from Mr. and Mrs. Paul Kline; Mr. Kline was the principal during Eldon’s school days at Linville- Edom. An interesting photo in the book is of a Tom Thumb wedding at Linville-Edom; Eldon was the tiny Tom Thumb! 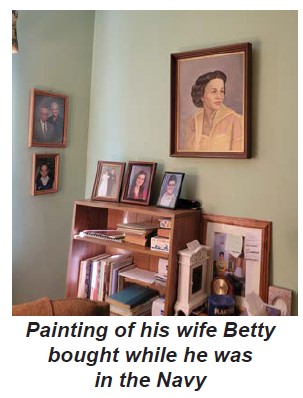 When I visited Eldon recently at his home in Broadway, Virginia, where he lives with his son Ray and daughter Elisa, he showed me the many books which he has compiled for different group with which he is associated! He has many treasures displayed, including lots of books! A beautiful painting of his wife Betty (who is now in an assisted living facility) is on the wall; he bought it from a person who used photographs to paint loved ones and sell them to sailors at a port while he was in the Navy.

Rockingham County is lucky to have a historian like Eldon Layman, who documents local history so that others can learn about the rich history of the area, especially Linville-Edom School. And it has been my pleasure to know him as a member of VARE and a friend.