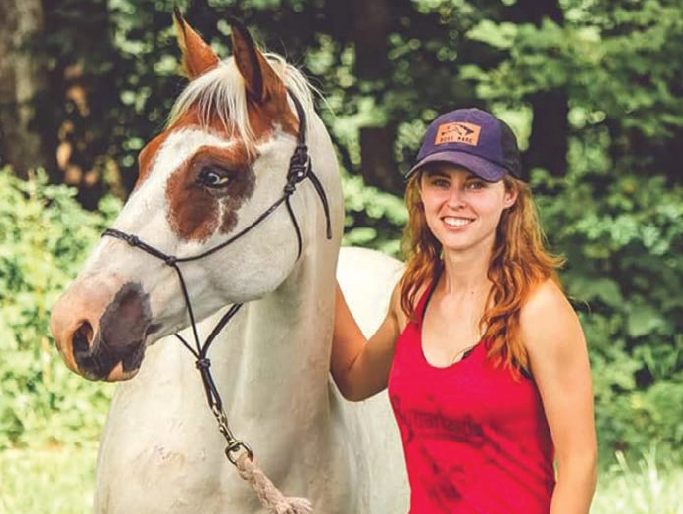 Brumbies. Appalachian Brumbies. Two words that you wouldn’t think go together. Brumbies is a word used to describe a wild or feral horses in Australia.

The definition of feral is something “existing in a wild or untamed state; having returned to an untamed state from domestication.”

In researching this story, it took me down a rabbit hole of information – one thing leading to another.

Appalachian brumby is a phrase coined to described horses found on abandoned strip mining areas of WV, Kentucky, and sometimes Ohio. They are horses, of different breeds, abandoned by their owners, for one reason or another, and left to fend for themselves. Since most of the mining areas are private property, it is against the law in most areas to abandon livestock, but area sheriffs, for the most part, don’t have the means to handle the horses.

Heart of Phoenix Equine Rescue is an organization founded about 10 years ago, working to help these horses in WV. In 2017, they came up with the idea of a training competition – the Appalachian Trainer Face Off.

From May to August each year, rescued ATFO “brumbies” are placed with trainers for 100 days. Within that time period, the trainers work with their chosen horse, who come to them, some totally unhandled. Vetted and screened beforehand, it is then up to the trainer to get their horse tamed, trained, and rideable within the 100 day time frame. Horse and trainer then enter the 3 day competition, showing off what they and the horse have accomplished, and the horses are auctioned off to pre-approved adopters.

Up a narrow dirt road in Fulks Run, we found Pale Hollow Farm, owned by young horse trainer, Laura Lezotte. This was her first year entering the ATFO competition. The horse she received was Ferrari, Rari for short. Ferrari was rescued as an unhandled stallion, and had been in a quarantine facility for about a year, sitting in a stall. As a result, he became totally shut down, not wanting anything to do with people. Who can blame him.

Then, Laura came into his life, changing it forever. Ferrari went from feral to rockstar.

Here in her own words, Laura describes her time with Rari.

“This was my first year in the ATFO, and my first time doing anything remotely like this. The time constraint was the hardest thing to wrap my head around. How do you train a horse in 100 days? A horse that has little or no prior training? When I got my first unstarted horse, he was just about to turn two – I had a year to do groundwork before anyone got in the saddle. I never had to hurry before. The situation was made harder by the fact that, for the first month or so, Ferrari wanted absolutely nothing to do with me! He was so shut down, so unwilling to connect. The other horses I started weren’t like this. They responded to me, and they tried to learn. Ferrari avoided and pushed back at me. I can’t tell you how many times I sat on my porch and cried after a training session. The second time I rode him, I completely broke down. It felt like he wasn’t even participating in his own life, he was just standing there, letting things happen to him and it broke my heart. I felt like things wouldn’t change.”

“Somehow, they did! One day, I didn’t spend 2 hours trying to catch Ferrari in the field. One day, he approached me after the evening feeding and touched my arm with his nose, showing curiosity in me for the first time. One day, he lifted his head and nickered to me when I called him. And one day, he started to come running when I whistled! Sometimes, he would be the first horse to get to me. I’d tack him up, and he’d put on his serious face and go to work like he’d done it a thousand times before, instead of just having a few months’ worth of training.”

At the AFTO even, Laura didn’t know what to expect, and was very nervous. It was her first time, as well as Ferrari’s. Even though there were a couple of little mishaps, including the saddle getting caught on the gate and breaking, they both made it through.
Laura entered on a whim at the last minute, with a little push from her husband Joey, and is so glad she did. “I had a thousand reasons not to apply, not the least of which being that I was afraid of how I would do, if I actually ended up competing. So, just make the decision to do something that scares you. Do the thing you have been wanting to do, even if there is a possibility of failure. The song I chose for Ferrari’s freestyle, our last ride, was about taking chances, doing things you have always talked about doing but haven’t done, and getting back up when you fall. I thought it was perfect for how our 100 days together went, and I couldn’t be prouder of everything we accomplished.”

There were many people interested in adopting Rari. The winning bidder was unable to keep the horse because her boarding barn said no. That decision resulted in 10 year old Natalie McFarland getting the horse of her dreams. Although she was not the next highest bidder, circumstances ended up being in her favor, and Laura knew Natalie was the perfect match for Ferrari. Although it was hard for Laura to part with Ferrari, she knew his new home in Maryland, with this little girl was the best possible ending for him, and a dream come true for this fearless 10 year old girl! Under Laura’s tutelage and love, Ferrari transformed from a shutdown, abandoned stallion to a safe and happy horse, with a forever family who loves him.

Along with working a full time “real job”, Laura Lezotte hopes to continue working with the Appalachian Trainer Face Off, also training other horses, and is offering riding lessons in her spare time. I’m hoping to start my grandson riding with this talented “horse whisperer”.

For further information, you can find Laura on Facebook- Pale Hollow Farm LLC. Email palehollowfarm@gmail.com
If you are interested in learning about, helping, or adopting a Appalachian brumby, check out www.appalachiantrainerfaceoff.com/adoption, wvhorserescue.org, and on Facebook-Heart of Phoenix Equine Rescue, Inc.