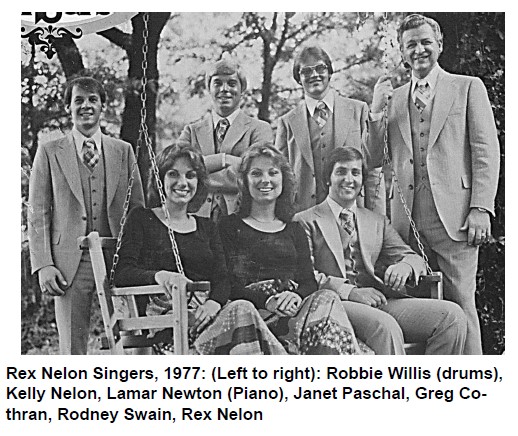 The four-part harmonies of the male quartet have been a hallmark of southern gospel music for more than a century. When one looks back at the history of this music, one finds dozens – if not hundreds – of quartets on the touring circuit in the early years (pre-1970). Yet, even as far back as the 1920s and 1930s, there were a handful of ‘mixed’ groups on the gospel scene. ‘Mixed’ simply means a mixture of male and female vocals. Often times, these were family groups: the Chuck Wagon Gang, the Speer Family, the Lesters, and the LeFevres, just to name a few.

This month, we begin a three-part series on one of southern gospel’s most popular mixed groups. And yes, they were, at their core, a family group: the Nelons (pronounced “kneel-ins”). Originally known as the Rex Nelon Singers, the group released their first album in 1977. However, our story actually begins more than half a century before that.

In 1921, three siblings – Alphus, Urias, and Maude LeFevre – organize their own singing group. Originally known as the LeFevre Trio, they shortened its name to the LeFevres as the family continued to grow. Maude was eventually replaced by Urias’ wife, Eva Mae LeFevre (Whittington).

I could devote many articles to the history of the LeFevres and their impact on the gospel music scene, but for the purposes of our discussion of the Nelons, there are just a few items of note. First, in July of 1957, the LeFevres will welcome a man by the name of Rex Nelon to sing bass. Fast-forward now to the early 1970s, and some of the group’s senior members, namely Alphus and Urias, are retiring.

By 1977, the LeFevres are down to just ‘one LeFevre’: Eva Mae. Rounding out the group are Rex Nelon, his daughter, Kelly Nelon (then only 17 years old), soprano Janet Paschal (age 20), and tenor Rodney Swain. Later that year, Eva Mae decides to retire, and ownership of the group has now been transferred to Rex Nelon. They are no longer the LeFevres, they are now the Rex Nelon Singers.

“You may be wondering why we changed the name of the LeFevres to the Rex Nelon Singers,” noted Rex at a concert one night in Lenoir, NC., “It’s very simple. We’ve run out of LeFevres.”
In late 1977, the Rex Nelon Singers released their first album under their new name: The Sun’s Coming Up. The lineup was identical to their previous album (Singing ‘Til He Comes as the LeFevres), except for the departure of Eva Mae. The title cut of the album, featuring Kelly, would spend a total of 31 months on the national Singing News Top 40 Chart, peaking twice at number five.

The ‘sophomore’ release for the Rex Nelon Singers comes that next year, 1978: Live!. This was, as you may have guessed, a live concert recording featuring a number of songs from their previous release. This live project also included an Easter Brothers classic, “Thank You Lord, For Your Blessings On Me” (featuring Rodney), and a Rex Nelon feature that he originally recorded with the LeFevres, “That’s Why I Love To Call His Name”.

Although the Nelon and LeFevre names were well-known and respected by this point, 1979 would bring about what could be considered their ‘breakthrough’ recording: Feelings. Two singles from the album were sent to radio: “More Than Conquerors” (a Kelly feature, peaking at #3 on the Singing News Charts), and “Come Morning”. The latter would reach #1 three non-consecutive times, and be voted Song of the Year for 1980 by subscribers to Singing News.

What set the Rex Nelon Singers apart from other groups at the time was perhaps the variety of styles that could be found on each of their albums. While some groups would often decide between ‘traditional’ or ‘contemporary’, the Rex Nelon Singers would do both…and it worked. The backliner notes of their Feelings recording, written by Sally Hinkle of Billboard Magazine, indicates:

“…the Rex Nelon Singers are reaching even further to bridge the demographic and denominational territories, refining their musical message vehicle with a personal view of beliefs and ‘feelings’.”

The follow-up to Feelings would be 1980’s Expressions Of Love. With this album, a new member is welcomed: Kelly’s husband, Jerry Thompson. Jerry would lend a smooth high tenor voice (akin to country music’s Vince Gill) and also songwriting capabilities to the group for nearly twenty years. Expressions Of Love produced a hit song that has since become a gospel standard:

“We Shall Wear A Robe And Crown”.

But, as you might suspect, some changes were on the way for the 1980s. The Rex Nelon Singers would continue to broaden their musical spectrum. They would also welcome some new members…and eventually shorten their name to simply ‘The Nelons’.

Next month, we’ll discuss some of their 1980s releases and explore how this group came to define what came to be known as ‘middle-of-the-road’ gospel music.

The Blessing of the Pure in Heart