Last month, we began exploring the history of one of the most innovative southern gospel groups of the seventies and eighties – the Hinsons. Our journey continues now in the year 1980 as this family group, originally from California, begins the second decade of their career.

1980 brings a lineup change: the only non-family member, Christina “Chris” Hawkins, will depart. To take her place, sister Yvonne will return. So, once again, the Hinsons are a true family group of siblings Ronny, Kenny, Larry, and Yvonne. Under this lineup, they record an album called Song Vineyard.

Not too long after Yvonne returns, the youngest member, baritone Larry Hinson will depart to begin a ministry with his wife, Jana. Larry’s replacement will first be Eric Hinson (the son of Ronny’s brother, Calvin Hinson, who never toured with the group), and later, Ronny’s son, Bo Hinson.

These minor lineup changes aside, the Hinsons would truly become a powerhouse group on the southern gospel scene during the early-to-mid 1980s. During this time, they enjoyed three number-one songs on the national Singing News Chart: “God’s Gonna Do The Same For You And Me”, “Two Winning Hands”, and “Call Me Gone”, a song which forever will be associated with Kenny Hinson.

The Hinsons were known for their country overtones, but many of their albums of this time, including Song Vineyard (1980), Bubblin’ (1981), and Hinsongs (1982), did demonstrate some experimentation with styles such as rock, jazz, and even reggae/calypso. Nevertheless, the group would hold fast to a primarily ‘country’ sound that would carry them through the remainder of the 1980s. (Keep in mind, the Hinsons were also touring with a five-piece band).

The pinnacle of 1980s recordings undoubtedly their 1984 live recording, Lift The Roof Off, recorded in Lafayette, Louisiana. This gives us a glimpse of what could be expected at a Hinsons concert; a performance and ministry style that some deemed ‘radical’, but the fans loved it. In last month’s article, I provided an excerpt from this recording in which Ronny Hinson mocked their critics, to the thunderous applause of the audience.

The album’s introduction sets the tone: “What you see [above you] is a roof, it isn’t gonna be there very long…for there’s someone waiting in the wings [with spirit and song] to lift the roof off!.”

Following the success of this live recording, the Hinsons recorded three more albums (and gained another number-one song, “Mercy Built A Bridge”) before announcing their retirement in June of 1988. This decision shocked many in the industry, as their popularity certainly had not waned. An official reason behind their retirement was never given.

By 1990, the Hinsons had gone their separate ways: Ronny Hinson continued writing songs and began releasing solo projects, as did Kenny. Bo Hinson launched his own group, first known as Bo Hinson and Purpose, and later, the New Hinsons. Sister Yvonne retired from the road. Then, in 1992, came the announcement that surprised many – the Hinsons were returning for a reunion album and a reunion tour. So, Ronny, Kenny, Larry, and Yvonne released their final recording together, One More Hallelujah, which produced two top-ten songs for the group: “Joy Comes In The Morning” (written by Larry), and “I’ll Never Be Over The Hill” (written by Kenny).

The One More Hallelujah Tour commenced; however, the Hinsons were only able to perform nine dates. Unbeknownst to many, even when the tour began, Kenny had cancer. He was later hospitalized, and ultimately lost his battle with kidney cancer on July 27, 1995. Kenny Hinson was only 41 years old.

I do want to mention that a video from that final tour, recorded in Tulsa, was produced. It is not a ‘professional’ shoot, though, but rather a ‘home movie’ from a camera set up in a sound booth. A professional video was planned, but never happened due to the tour being canceled. Nevertheless, this video, the only known capture of the final tour, as low quality as it may be, is priceless. It may be found online or purchased from Ronny Hinson (Tulsa Live).

Following Kenny’s death, the Hinsons once again went their separate ways. The legacy of the Hinsons continued with the New Hinsons, led by Ronny’s son, Bo Hinson. In 1996, the New Hinsons recorded a song titled “Oasis”, which went number-one in Singing News. This particular song was presented to Kenny in his final days. From his hospital bed, Kenny, the songwriter he was, began to suggest changes here-and-there and so, “Oasis” is the final song to have been co-written by Kenny Hinson. It was performed by Ronny and the New Hinsons a few weeks later as his funeral.

The New Hinsons disbanded in the early 2000s, and presently, there is a group known as the Hinson Family  that tours, led by Kenny’s son, Weston Hinson. Ronny Hinson continues a solo career; Yvonne has retired from touring. Larry Hinson passed away April 22, 2020.

I had the chance to interview Ronny Hinson at this year’s National Quartet Convention in Pigeon Forge, TN. I asked how he would like for the Hinsons to be remembered:

“We were ahead of our time; we dared to defy…what was called ‘tradition’. Although we will always be – and have a heart for – southern gospel…we knew that we weren’t reaching a generation of people.

”There’s an entire generation of southern gospel fans that grew up on Hinson music; and a new generation just beginning to discover that same music.

Do you have the Hinsons 1986 LP The Legacy Goes On or their 1987 album Generations? If so, please send me a message. I’d like to add those LPs to my collection! 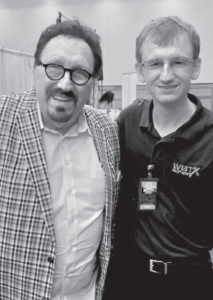