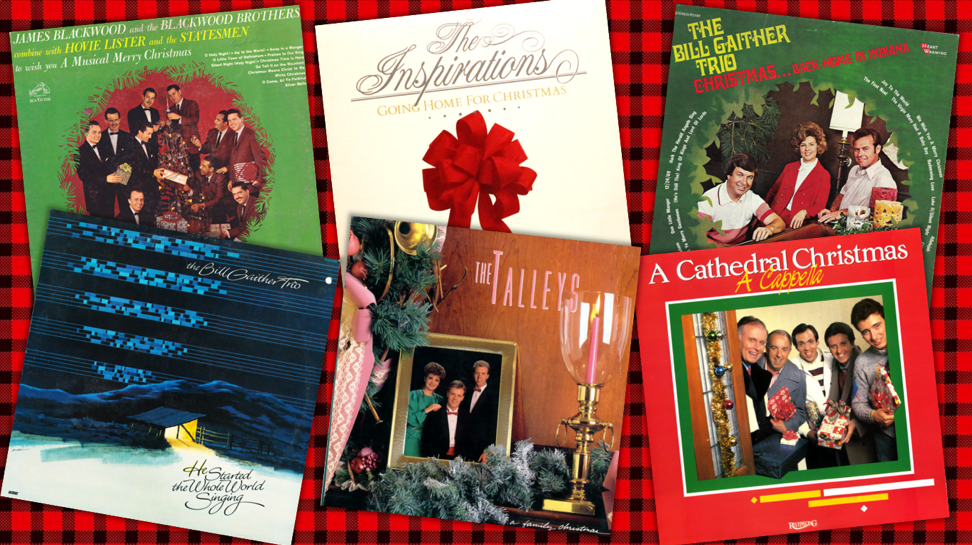 December means its time to usher in the Christmas music on WBTX – and for me, that means digging out my collection of Christmas LPs. (Which, might I add, has grown since last December).

So this month I’d like to share a brief history of the southern gospel ‘Christmas’ album. Nowadays, practically every southern gospel artist has one or two under their belt, but years ago, even pre-1990, southern gospel Christmas recordings were few and far between….

The first southern gospel Christmas album, technically, can be credited to the Chuck Wagon Gang. In 1954, they released Joy To The World on Columbia Records. This was a 10-inch LP (played at 33-1/3 rpm like any other) with only eight songs. In 1965, they would add two more songs and release it on standard 12-inch vinyl as Christmas with the Chuck Wagon Gang.

During the 1960s, there were only a handful of gospel groups recording Christmas projects. An interesting collaboration occurred between two of the industry’s premier groups in 1962 with the release of A Musical Merry Christmas – featuring the Blackwood Brothers, and the Statesmen Quartet. This recording, released on RCA Victor, included five songs from each group. An added bonus was two Christmas favorites featuring both the Statesmen and the Blackwoods performing together – “Joy To The World” and “O Come All Ye Faithful”. It’s quite something to hear two legendary bass singers, J.D. Sumner and James “Big Chief” Wetherington together in a single recording.

In 1963, the Couriers would release Joy To The World And Other Christmas Favorites, but beyond that, there are very few – if any – southern gospel Christmas recordings. Some groups, like the Oak Ridge Boys, would include a single Christmas song within a regular recording. For many, the concept did not seem very marketable (i.e. “folks will only want to by Christmas albums one or two months out of the year…”)

Then came the 1970s, and in 1972 the Bill Gaither Trio records Christmas…Back Home In Indiana. Unlike the aforementioned albums (which featured familiar carols), this Gaither project would rely heavily on original material written by Bill and Gloria Gaither. Songs like “The Virgin Mary Had A Baby Boy”, “C-H-R-I-S-T-M-A-S”, and “He’s Still The King of Kings” stem from this recording which, fortunately, has been re-released on CD (unlike another Gaither Trio project we’ll discuss in just a moment).

As the seventies continued, one looked to compilation or ‘comp’ albums from the record labels to find Christmas music. Take, for instance, the Rambos. While they would never record a Christmas project, they did record “O Holy Night”, and that can be found on a comp album from Impact Records called Christmas At Our House (1975). This album featured Christmas selections from artists on the Impact label, including the Imperials, the Speers, Doug Oldham, and the Downings, among others.

More comp albums would be released in the 1980s, including A Canaan Country Christmas (1981) and A HeartWarming Christmas (1984), but now is when we see many groups starting to record their own Christmas projects. Even though they were shifting more onto the Contemporary Christian Music scene, the Imperials released their Christmas with the Imperials in 1980. Distinctively middle-of-the-road in style, this album found a home on both traditional and contemporary gospel stations.

The early eighties would also see two of southern gospel’s leading groups releasing Christmas recordings. 1983 gave us Hinson Christmas from the Hinsons. Personally, I am a fan of albums with original material, and this delivers with songs such as “That’s How Christmas Came To Be” and “Have A Very Scary Christmas”, the latter of which was written by Ronny Hinson of the group. 1985 gave us the Cathedrals first – and only – Christmas recording, A Cathedral Christmas A Cappella. This would later be paired with Gold City’s Voices Of Christmas (1988) and issued on CD.

Perhaps the crowning jewel of southern gospel – or more broadly, gospel – Christmas recordings came about in 1982 from the Bill Gaither Trio: He Started The Whole World Singing. This masterpiece of a recording can be more accurately described as a cantata (in fact, it was modified and expanded upon and re-released as a cantata available to churches). With orchestra led by Ronn Huff and background vocals courtesy of the Sandi Patty singers, this is a beautiful work that, sadly, has all but been forgotten. In the spirit of their 1972 Christmas recording, this album features carols in complex medleys with new Gaither compositions, including “He Started The Whole World Singing” and “Ordinary Baby”. There’s even a very unique interpretation of Lanny Wolfe’s “Exceeding Great Joy”.

As I bring this to a close, I do like to pose a few ‘what ifs’ when it comes to southern gospel Christmas albums: What if the Cathedrals recorded a second Christmas project, perhaps non-acappella, or perhaps in the 1990s with Ernie Haase and Scott Fowler? What if the Nelons recorded a Christmas album in the mid-1980s when the group was shifting more middle-of-the-road? What if we got full-length Christmas recordings from groups like the Hemphills, the Rambos, or even the Speers?

Regardless, as we celebrate the true meaning of the season, I’m thankful for the Christmas recordings that were produced, and look forward to keeping these classic southern gospel sounds alive and well for generations to come.

A few words from the Editor