The motto of ultimate sacrifice lives on at BHS

One thing that comes along with football season is a bittersweet tradition unlike any other. Military service is one of the most selfless acts one human being could provide to their nation. You put yourself on the line everyday knowing that it could be your last. Yet, despite that reality, you’re willing to give it all up in the name of having your people’s backs’.

That story of selflessness is one that reminds me and many others in the Valley of Broadway native and hero, Brian “Bucky” Anderson.

Bucky was a student at Broadway High School in the early 2000’s, graduating in 2004. He participated in football and wrestling, the latter of which resulted in multiple state honors including the ultimate honor of the sport, two state championships. After his decorated career at BHS, Bucky enlisted in the United States Army. While deployed in Afghanistan, Bucky paid the ultimate price with his life, when he was killed in action on June 12, 2010.

His passing and ultimate sacrifice remains a constant memory for the students and staff at Broadway High School as well as throughout the tight-knit Broadway community.

To this day, Bucky’s number, 21, remains the only retired number in school history.

To me and many others Bucky represents our area as a whole. His spirit is felt every time we walk up to the game field no matter the occasion. And without fail I always take a moment in front of his statue which always gives me the extra push to give everything I have on the field for my kids, fellow coaches, and the entire Broadway community. His memory is felt in our locker room. Where locker #21 is dedicated to him. Some of his belongings such as his football, wrestling and, most importantly, his military uniform, remain in the BHS locker room for everyone to see.

That locker is a beautiful tribute to an incredible man. A man who’s inspired us for a lifetime. I know that no matter what is going on in my life I’ll always be able to take a quick moment in front of his locker or statue to give myself the extra jolt when the going gets tough.

Bucky’s memory sparked a tradition that takes place every year at BHS; the Soldier Tribute Game.

The Soldier Tribute Game was started by former BHS Football Coach Brad Lutz. Each game that was played while Lutz was the Head Coach was in memory of a fallen soldier. However, the final home game of each season was reserved for our local hero, Bucky. 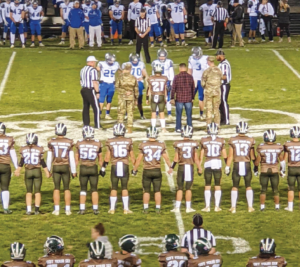 In 2016, the game was featured on the National Football League’s “Together We Make Football” celebration in preparation for Super Bowl 50. The NFL sent a film crew to Broadway to film the Soldier Tribute Game. For the celebration, former Green Bay Packers Quarterback and NFL Hall of Fame member, Brett Favre, visited the area, sitting down with Bucky’s mother, Margaret Anderson, to learn more about Bucky. As a final prize for their work on the Soldier Tribute Game, Coach Lutz and Ms. Anderson were selected to attend Super Bowl 50 in Santa Clara, California.

To read the remainder of this article visit http://www.gobblerssportsnetwork.com/blog