I’d like to say you’ll find tons of solitude at Cranny Crow Overlook, nestled within the lovely Lost River State Park in West Virginia; however, I’ve only ever hiked this one in the rain, which tends to scare off everyone else. The trailhead is roughly an hour from Harrisonburg, and the park is fairly small, so it’s easy to drive through it (like I did) and realize “oh wait, we’ve reached the end?” Needless to say, it’s hard to get lost looking for Lost River.

The hike is a little over four miles out-and-back, dog-friendly, and is fairly moderate with no rock scrambling involved, so it’s also great for kids! Whomever ye adventurers choose to hike with, I highly recommend printing, writing down, or taking a screenshot on your phone of directions from the trailhead to Cranny Crow Overlook (Hiking Upward has really thorough instructions) so you reach the right destination. There are a number of trails that interact in this area, and they don’t all lead to the same spot., so I guess one could say it’s fairly easy to get “lost” in Lost River.

My hiking buddy and I began our trek on Howard’s Lick trail, walking by a beautiful, meandering river that follows the main road. There’s a suspension bridge right at the start, which I did not capture a picture of. Why? Because I don’t like suspension bridges. 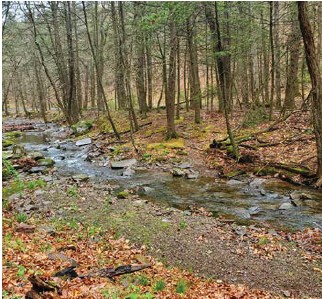 We took the Howard’s Lick trail to the Dreaded Fire Road and lemme tell you something (Linda), it’s not the most exciting section of the trail. That said, if you hiked this during fall with the leaves changing colors it’d be quite pretty. Even walking among the skeletons of trees, it was still nice, and the misty rain added a gloom that seemingly scared everyone else off. At the end of the fire road, make a sharp left onto the White Oak trail (do not get on the Big Ridge trail). If you didn’t jot down directions somewhere, you’ll probably run into at least one other friendly hiker coming down who will ask if you know how to get to the overlook. Or maybe my hiking partner and I just looked lost, which is why they asked… Anyway, they’ll likely point you in the right direction.

The next part of the trail follows several switchbacks, which we at first skipped opting to walk right up the mountain but soon it became apparent we weren’t in good enough shape to bulldoze uphill like that. Then, we followed Miller’s Rock trail until reaching Cranny Crow Overlook. There’s a shelter there (and it was (naturally) still raining lightly) so we took some pictures, ate lunch, and relaxed for a bit. We had the view all to ourselves but again it was lightly drizzling and also like a Tuesday morning, so it’d probably be a tad more crowded on a nice weekend.

Not long after this I lost my footing and almost plummeted down the mountain trying to get pictures for Instagram. Kidding, at least about trying to get a picture for social media. My friend graciously agreed to go hiking with me even though she had a virtual meeting. By some miraculous move of God (or probably because there was a tower nearby) there was cell service at the overlook, so she went on her call while I walked down to Cheeks Rocks, because it was cold, windy, and I was trying to warm up.

The rocks looked cool, so I tentatively stepped onto them for a closer look and there went my foot. Fortunately, I merely slipped and didn’t plummet off the mountain, but I did immediately turn around and meander back over to my buddy who was still in her very choppy virtual meeting. Word to the wise, be a smart hiker and don’t climb on rocks when it’s raining (or like at all. There’s really no reason to walk to the edge of a cliff).

Not long after my near-death experience, the heavens began dumping buckets of water on us. Did I already mention the freezing wind and fog? Whenever it’s foggy and I’m in the woods, I spend an inordinate amount of time pondering The Mist by Stephen King and envisioning some strange creatures lurking around the fog. Lucky for us we saw no bears or other furry creatures that day, and we took a few minutes to soak in the incredible view (and get soaked in general) before heading back to the car.

Continuity for Off Broadway Players