Hunting for the Elusive Brant Goose at Chincoteague, Virginia 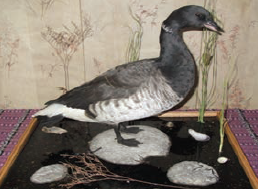 The Brant is an unusual looking goose. His actions are equally unusual. I was duck hunting in Chincoteague, my wife Kay went along this time. When I was out in a blind she would get up, eat her breakfast and stroll the streets of Chincoteague browsing in all the quaint shops. This was her form of duck hunting… carved wooden ducks, that is.

The day started out as usual on a typical duck hunting day. It was now about 3:00 o’clock in the afternoon, a little late than most days. I had already shot some good specimens of ducks and was sitting in the blind getting bored when I heard the chattering somewhere of a flock of Brant. I finally located them, which was a good distance away. You can hear them before you can see them.

There was another duck blind of hunters approx. 500 yards away. Through my binoculars I could see them standing in the blind, approx. 3 or 4 hunters. Without much going on at my blind, I kept an eye on them, you know, something to do.

After a while I could see the flock of Brant heading in their direction. This might get interesting! It only takes one pellet to bring a bird down. The flock of Brant kept on their course but looked like they were a bit too high for the hunters in the blind. As the flock passed over the blind, all the hunters stood up and emptied their guns. Each hunter shot 3 times (as that is all your shotgun can hold legally) with no time to reload. Of all the shots fired one goose fell. There was one lucky hunter in that blind. The other hunters probably threw him in the water with envy.

I kept watching the flock of geese as they circled around and landed, cackling like crazy. About one half hour had passed when all of a sudden, the flock took to the air again and flew around, circling me. They landed again up the shoreline about 100 yards from me. That distance was looking better! It was good that I was hunting by myself that day, as two hunters couldn’t have concealed themselves in that blind. The distance was still too far for me as about 40 yards is about the maximum. By this time I was crouched down in the blind, watching them through the cracks in the boards. When feeding, Brant move along with little hops like hopscotch over one another. As they were doing this, they were getting closer to me, inch by inch. I stayed crouched down in the blind, not letting them see any movement of me. I waited and waited and when I thought they were within range, I raised up and emptied my gun, all three shots. When the remainder of the Brant flock took flight, there laid two Brant with my name on them. Here was another lucky hunter on the bay. Me! I couldn’t wait to call the guide to tell him I had two Brant down. He came and fetched the two Brant, gathered up the duck decoys and we sailed to the dock.

After resting awhile and listening to my wife, Kays, detailed stories of her duck hunts we headed to downtown Chincoteague where we parked in the parking lot of Bil’s Seafood Restaurant. A place where you can get a real seafood meal of oysters, shrimp, scallops, crab cakes, fish, etc. and their great homemade loaf of bread, Yes, they serve it in full loaf form with your own bread knife for slicing. Yum Yum.

You can also meet some of the other duck hunters, telling their tales of their duck hunting. I didn’t get to meet the other hunter that got the Bryant. Maybe, they made him go home.

Bil’s is located at the stoplight, after crossing the bridge going into Chincoteague.

On the way out of Chincoteague, we stopped beside the road for me to gather some habitat material to go along with the artificial water to build the diorama for the Brant mount. I make my own rocks