I decided that I wanted to go on an antelope hunt, so when I found someone who lived in Wyoming and also owned ranchland that had several herds of antelope on it, I immediately made contact with the owners. They had lived near me east of Timberville before moving to Laramie, Wyoming to teach at the University of Wyoming.

I didn’t want to go by myself so I started searching for someone who liked hunting especially antelope. I finally found someone that would like to go but he was always too busy to go. The corn had to be cut, the hay had to be made, the taters had to be dug, ..you know the type.

We finally decided when he was going to break loose and the day came. Glory be. I picked him up at his house and we headed to I-81 then I- 64 and finally I-80, heading west. We drove all day finding a gorgeous campground at the Cabelas store in Sidney, Nebraska. We had a grand time at the Cabelas store. I had elk for dinner, I can’t remember what he got. Something exotic, I’m sure. We were hitting the west and liking it fine. We were definitely in the west.

We had a good night’s rest with our stomach full. Next morning we hit the road and headed to Laramie to buy our hunting license. In Laramie we were instructed to get on Rt. 130 W and look for this large barn type building. We had no trouble finding it. From this large building we were to go 12 miles and turn off on a little gravel lane, the entrance to the ranch we were to hunt on.

After arriving we were shown around over the area that we were to hunt on. We saw some nice antelope bucks in two different herds. I put my name on one nice buck. I hope he would make a showing next morning.

I decided to use my pop-up hunting blind. I was sitting in my blind when a herd came migrating through but I didn’t see the one that I had my name on. They soon passed. It got to looking dark in the west and I realized a storm was brewing. I shut the windows in the blind and the wind got to blowing stronger and colder. Finally I noticed the antelope started bedding down with their backs to the west. I soon found out why, the rain and snow begin blowing horizontal. A typical Wyoming storm.

It was over in about an hour and we began seeing more antelope roaming thru. I finally saw the one I think I had my name on. He gave me a broadside shot at 325yards, my rangefinder said, which was no problem with my tack driver Ruger No. 1 in .270 Win. To me it looked more like 400. Distance is hard to judge when the land is as flat as a pool table. One antelope down. 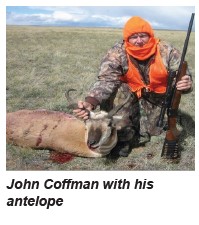 We needed one more antelope so I let the other fellow use my blind and he had his buck by evening. He had been using a small building used to store hay for the horses on the range. I stayed in the camper while he hunted. Finally I heard a shot. I went out to check. The hunt was over almost before it started. It only lasted one day.

That evening we were invited over to the house for a scrumptious meal. We furnished a bottle of red wine for the occasion.

We borrowed the owner’s truck to haul the gut pile out to dump it. When I got out of the truck, there sitting a few feet away was a jackrabbit. I had been wanting one to have mounted for the hunting room. I didn’t have a small caliber gun to shoot it with but I did notice a board laying in the truck. A case of using what you got, I grabbed the board and sneaked up on the rabbit. WHAM, I had my jackrabbit. I later found out that no taxidermist would mount a rabbit, but I gave it to a budding taxidermist, but when I went to get it, on the way home, I found the nearest dumpster and deposited the rabbit. It wasn’t until later I met a taxidermist at the Big Game Show in Harrisburg, Pennsylvania that offered to mount my Arctic Hare from Alaska. He did a good job. But this is another story. 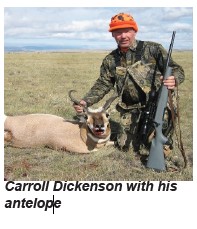 The next night we thought we could use a pizza for supper. We jumped in the truck and headed to Laramie, found a pizza joint and ordered a pizza. We had a rude awaking. When we opened the box we found a raw uncooked pizza. We returned it and explained the pizza was not cooked. The pizza guy explained that was the way you get them in Wyoming. We explained that we were out here hunting and had no way to cook the pizza. He finally returned our money and we returned the pizza. We wound up eating somewhere else. When it came time to go back to the ranch we had another rude awaking. We found the road but there were no signs or lights of any kind. We didn’t know when to turn off. We finally got the idea to go back to Laramie, find the barn and watch the speedometer for 12 mile distance. That worked, sure enough, there sat our camper. The west is surely different.

We had a few days to tarry and found out we could go fishing in the river. We were told where to park and walk across private property to the stream. Great! It’s all in who you know. We also took a drive up in the Snowy Range in Medicine Bow National Forest. They had just had a snow storm. That is one beautiful place. We (family) have been there several times before and I can’t get enough. You could see the mountain peaks in Rocky Mountain Nat. Park (Colorado) from where we were fishing. It’s just a few miles by the way the crow flies.

On listening to the weather forecast we decided to get out of Dodge. We didn’t want to get snowed-in in Wyoming with a camper. We loaded our meat and left. When we got to Ogallala, Nebraska, they informed us that I-80 had been closed in Wyoming . We had outrun a big snow storm.