I guess I was about five years old when I began to recognize I had an Aunt Annie who lived in Broadway with her sister my Aunt Maude. As I grew older, I began to learn more about their lives, particularly that of Aunt Annie. I could detect she was a sprightly lady, exuding a polished, urban finesse from city living. She had lost her husband and, having no children, returned to Virginia to live out her life. Aunt Annie was the second oldest in a family of 13 children born to Noah and Susan Hollar Good who lived on a farm two miles south of Cootes Store on the Turleytown Rd.

The span of birth years in this family started with Emma (1873) to my mother, Vada (1898). As was true in many families in those years, the older children were called upon to help with family chores including caring for their younger siblings. Anna attended the old Glass School, and can be seen in an 1890 picture along with seven other siblings – the other five were either not of age or not yet born. The family attended the nearby Glass Church (perhaps still standing, but if so, now a barn).

In 1905, Anna’s Uncle Jacob Good a Civil War Veteran and former member of the Brocks Gap Rifles, invited her to visit his family in the small town of Prairie View, TX. Jacob had moved there and bought a farm. While there, he introduced Anna to Dr. John Haley, a country doctor and family friend who earlier lost his wife and child in childbirth. Thus, began a romance, and Dr. John Haley and Anna Good were married in 1906. Dr. Haley attended Tulane University in 1907 where he became a surgeon. He removed cataracts from his father’s eyes in one of the early such operations – circa 1912. For this, his father gave him 40 acres along what is now Belt Line Road in present Irving. 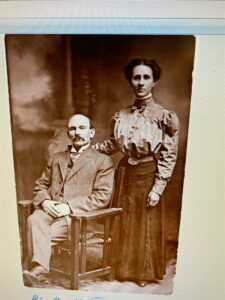 Over the summers Aunt Annie would often come back to the Valley and return that fall. A few of their postcards, some with colored early scenes from Rockingham County, can be found in the Plains Museum in Timberville. (I was always fascinated when Aunt Annie referred to her husband as “Dr. Haley,” and not simply “John”.)

In 1927, Dr. Haley became the mayor of Irving, then but a small community which, over the years, has become a major subdivision of Dallas. He served in this capacity until his death in 1932. His name was subsequently inscribed on a statue at the State House in Austin honoring early Pioneers in Texas. I never had the opportunity to meet Dr. Haley, but over the years I have learned to respect his legacy.
Aunt Annie returned to Broadway circa 1933-34 where she lived on Church Street. I remember her so well for her spectacles that sat on her nose, connected to her right ear with a small chain and clasp. Both she and my Aunt Maude attended the E.U.B. Church up the street. She lived here until her death in 1971 at 97 years of age.

I learned about 10 years ago that in 1953, the Irving School Board named two schools for members of the Haley family – Dr. John Haley and his brother, Thomas, for their contributions to education in Irving. Both of these are near the DFW airport. The John Haley Elementary School at 1100 Schulze Road at its intersection with South MacArthur Blvd., and the Thomas Haley Elementary School at 3601 Cheyenne St. at its intersection with W. Northgate Drive. A friend at Fellowship Methodist Church at Melrose, Jamie Marsh, who lived in Dallas for several years graciously videoed these two schools for me. Her work, including links to historical information on each school, has been a great source for learning about the Haleys by my nieces, nephews, cousins, great nieces, and great nephews.

Finally, I just want to mention that Nellie Glass, who sewed the Cootes Store Quilt featured in the February 2020 edition of this paper, was a sister to my Aunt Emma’s husband, John H. Gass. These families were all neighbors living close to the old Glass Church.