My Trip to the Ark Encounter 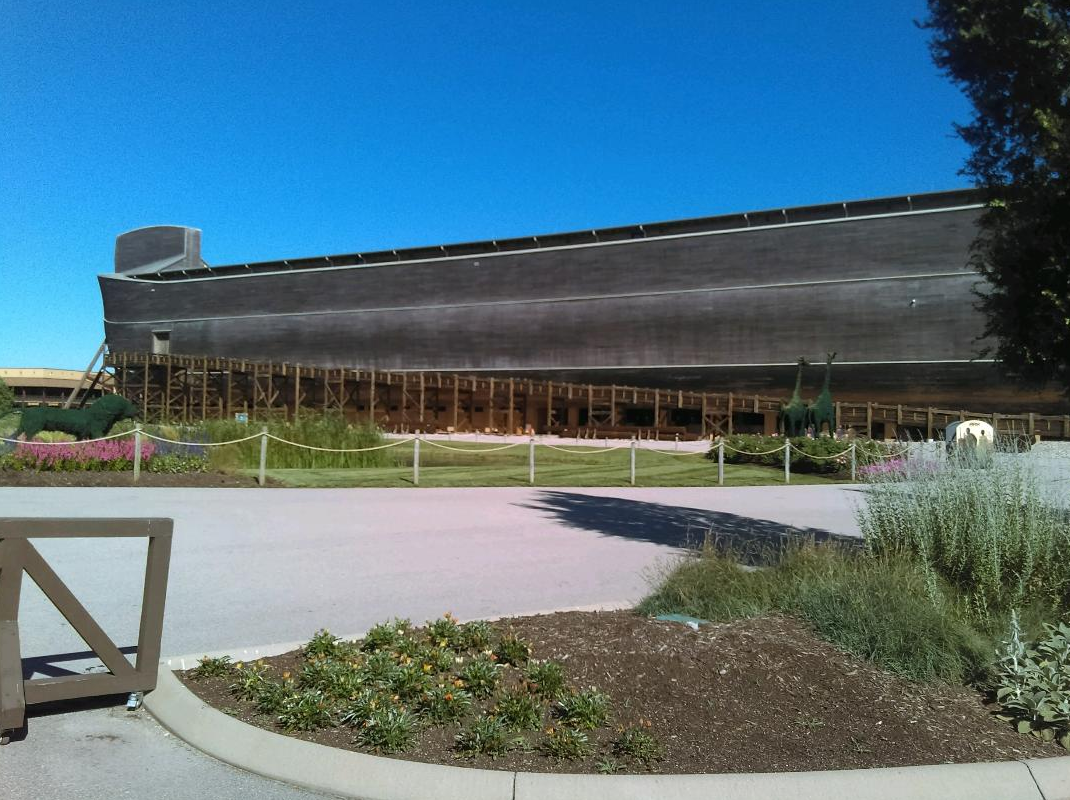 When I was a little girl, I loved hearing Bible stories in Sunday School. By age ten, I had my own King James Bible and could read it for myself. One of my favorites was Noah’s flood in Genesis chapters 6 through 8. Certain facts stuck with me through the years. I knew that the Ark was made of gopher wood.

This detail always made me smile. It had three levels, many rooms, a window about 18 inches below the roof, and one door. That was the door that God shut before it started to rain. Noah, his wife, three sons, and their three wives were inside. It also  contained two of each kind of animal, but seven of the clean animals.

The term clean animals was a puzzle to me since, from my experience, only our kitty, Isabel, who spent most of her day washing herself, would qualify. And maybe a raccoon could make the cut. I also knew that the Noah cruise lasted about a year. I was sure that I would have wanted my room near the window if I had been on board. It was a mystery to me why most of the pictures of the Ark in children’s books looked like a one-level tug boat with the poor giraffes sticking their heads out the top due to lack of space.

So when I heard that a replica of Noah’s Ark had been built in Williamstown, Kentucky, I wanted to go. Finally, my husband, Al, and I made the trip last month, and it was a fantastic experience. Those in line for tickets included people of many cultures. There were people with t-shirts displaying dinosaurs, Disney themes, rock groups, and Christian logos. Children 10 and under were free.

An excellent shuttle system efficiently took us to the Ark. There is a large children’s playground on the property, zip lines, a zoo, and the Answers Center. My husband, The researchers had done a fantastic job and the Ark was a majestic accomplishment, completed with excellence in every detail. Built by Amish carpenters, the Ark is 510 feet long, 85 feet wide, and 51 feet high, and there are no words to express the magnificence of their finished work. The planners anticipated every need in this family-oriented structure. Inside, a series of broad, gradually rising ramps made it comfortable for the average walker. There were also elevators. The staff were available, genuinely kind, and informed. Numerous cages, baskets, and display animals gave a greater appreciation for the space available, as well as an abundance of food supply for animals and humans.

Through teaching exhibits, three-dimensional scenes, and various presentations, we were enlightened and greatly intrigued by all that went into this production. I appreciated the honesty in areas portrayed that though not mentioned in the scripture, were necessary. I was pleasantly surprised about the areas of living quarters for Noah’s family, but we all know you won’t get four women to relocate without their shoes and favorite cookware.

A collection of tools made sense since Randy’s Hardware wasn’t going to be waiting outside the Ark. It was also logical that they would have a library of collected manuscripts. I’m guessing it was heavy in the “Do it Yourself” section. We were delighted with this experience. It certainly stimulates thought and encourages people to read the original texts and be inspired. The following is the link to all you need to know to plan your adventure.