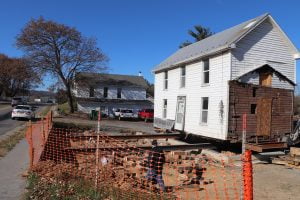 On a day back in 1986 Donna Fulk’s husband Leslie arrived home and announced he had just purchased 8 apartment units and that he’d like Donna to figure out “what to do with them”? This unlikely event was the beginning of Old Dominion Rentals, a company that now owns and operates a growing apartment and home rental business. A true hometown family business Donna, Leslie and their son Baily as well as several other members of their extended family are active in the company.

Like others in the property rental business Donna and her team often buy additional properties when a property fits well into their current business model. This is how the Fulks became owners of a piece of Broadway’s history. “The Casket House” as it’s been called was originally a barn built sometime in the early 1900s as a place to build caskets in which to bury people. It served that purpose for many years up until the 1940s when it was first converted into a house.

Given the very poor condition of the building’s foundation, consideration was made into whether to tear down the building or to try to repair it? Donna had learned recently about how popular vacation rentals were becoming and thought if this building could be saved it would be perfect for her to try out the short-term rental market. However, its current location on the property was also less than ideal, sitting on a few feet from the sidewalk the house could never have the front porch Donna envisioned.

This is when the idea of moving the house backwards away from the street and onto a new modern foundation was born. The team at Old Dominion Rentals had never undertaken moving a building but started to formulate a plan that would come to fruition November 23rd 2021. To simplify the plan the house was to be lifted off the original foundation and placed onto steel beams where heavy duty roller jacks could roll the structure over to its new foundation. This would require the entire team and the help of McKenzie Wrecker Service. After a little more than one hour or so of the wrecker arriving Donna and her team were able to safely relocate the house where it will begin its next chapter as a vacation rental home.

Run to the Fort!