This being the December issue of the Chronicle means that rifle season and early muzzleloading season are over. 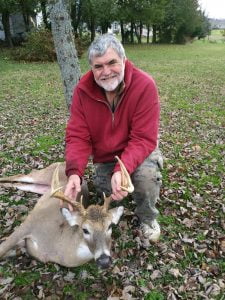 This being the December issue of the Chronicle means that rifle season and early muzzleloading season are over.  I hope you had a safe and productive year.

This is my first hunting season while retired.  It was nice not having to hunt around a work schedule but circumstances didn’t allow me to get in the woods nearly as much as I had planned.

That being said, opportunities to hunt are far from over.  Late season for bow hunters began November 28th and late muzzleloading season reopens December 11th.  And if you are a bear hunter, the season is just beginning.

Years ago, a good friend of mine introduced me to late fall hunting.  I discovered that this is a good time to get in the woods and see where deer have been, and also a great time to find new hunting areas.

Most times we would head for Lairs Run or Yankeetown and occasionally Mongold Hollow where there are a lot of hollows & ridges to trek.  This was before private land barred much of the access.

There are always a few smart bucks remaining that made it through the earlier hunting pressure.  After things calm down a bit, a late rut brings them out of their hiding places, and they have to come out to feed to survive the coming winter months.

When hunting late season, we would get in the woods early but not at the usual crack of dawn.  Then we would split up and each take a ridge or hollow and meet at a designated place and time.

As I have said before, I thoroughly enjoy scouting new territory.  There aren’t very many ridges and hollows I haven’t investigated between Fulks Run and Rawley Springs.  And when I grew up in Bergton, I was very familiar with Fallbush Mountain on the West Virginia line.

When I first started late fall hunting, there was no GPS, only topo maps and our own knowledge of the territory.  This was well before cell phones became the norm.

It is easy (especially in fog), when on a high mountain top and in dense laurel, to get on the wrong ridge and come out quite a ways from where you had originally planned.  I did that once on Broad Top and barely got back to the truck before it was too dark to see.

On another occasion, on a Sunday afternoon scouting trip, we started in Crab Run and ended-up having to call for a ride from the Bergton store.

The communication we have today is quite an improvement.  Safety is important, but you can also keep track of game, your location, and the movement of you hunting buddies.

Late season hunting can also give you the opportunity to hunt in snow.  I enjoy following a fresh deer track and seeing where it goes.  Does don’t often travel alone, so if you can find a single track with a big hoof and you’re very careful, you can walk up on a buck.  The white background of snow can give you an advantage.

So, break out your topo maps.  Find an area you have never been before and enjoy the day!

I hope everyone has a fantastic Christmas!