Reflections on The Christmas Belles 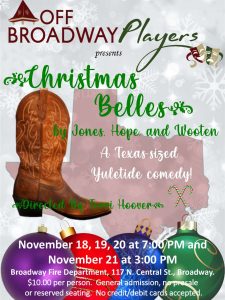 The line “Sleep in Heavenly Peace! We just love Christmas!” was delivered ever so sweetly by Raynerd Chisum, played by J. W. Fiske, and Patsy Price, played by Linda “Dee” White, the lights faded as laughter and cheering contagiously filled the room, the lights resurrected and we all united at center stage one last time. We each took our bows and acknowledged our flawless tech, Christopher Runion, and then we took our final bow, altogether. As we arose from our curtain call each one of us gathered our own feelings regarding our audience, our cast mates and ourselves. One can only imagine the thoughts and feelings that we possessed. So that you aren’t left on a cliffhanger, left to assume, and/or left waiting on our autobiographies to be published, we’d love to tell you ourselves!

In the words of our outstanding Director, Terri Hoover,” Much like our beloved Renard – I just LOVE Christmas! “The characters may be fictitious, but the love we have found for one another is very real. There’s something special about small-town living and I’m so grateful to the town of Broadway for taking me in and letting me experience it.”

I, Seth Simmers, had a blast! This was my tenth acting performance with the Off Broadway Players. This cast and crew were one of the best I’ve ever had. The energy, excitement and joy was awesome! Everyone had a blast and everyone had fun doing it. I felt elated to share the stage with new and old friends. In years past, I have always waited to get into Christmas after Thanksgiving, but this year is different. I guess my OCD can handle this one exception.

Two new faces were added to our Off Broadway Players theatre family during our production. Lori Smilowitz & Susan Comfort, veteran actresses who’ve gathered most of their acting credits with The Valley Playhouse. They both played very important roles in Christmas Belles and the production’s success.

One of those new faces was Lori Smilowitz. Lori had this to say,”I had a great time working on the show. It was a very positive experience for me. I appreciate how hard everyone worked to make the show a success. The best part of community theatre is coming together with a group of people to do what feels like an impossible task in a very short period of time. I love watching people grow into their characters. Being a North Carolina native, I was thrilled to call on my southern roots to create “Frankie”. My late mother could make “hello” go four syllables so I didn’t have to dig too deep. The Off Broadway Players feels more like a family than a theatre company and they made this newbie feel welcome from the first day.”

One of the best things about the Off Broadway Players is our audience. There’s nothing more satisfying than sensing the approval of our audience. We had a grand total of four hundred and ten people in attendance for our four showings of Christmas Belles. Some of our audience came multiple nights and enjoyed it even more the second time. I heard many say that Christmas Belles was one of the best shows we’ve done. For some it was their first time at an Off Broadway Players production and some may have lost count, but all of them can’t wait to come back!

I, Seth Simmers, would like to close with this: To you, the reader of The Chimney Rock Chronicle, the audience of Christmas Belles, and the Town of Broadway, thank you! I want to thank you personally for all your support and commitment from the very beginning. It will forever be remembered and will never be forgotten. God Bless you, Merry Christmas and Happy New Year!

Eating Well in the Real World