In November, my article was about soldiers from Brocks Gap in the Revolutionary War. That article focused on soldiers’ service. This month we’ll talk about some other aspects of the war.
In Virginia, all men between 16 and 50 years of age were required to be in the militia where local men served as officers. In the early days of the Revolutionary War, militia men were drafted for three-month periods, but many were drafted more than once during the conflict. In the early days of the war, guns were scarce, and draftees had pay for their uniforms and bring their own guns, for which they were paid rent. To encourage enlistments, there were sign-up bonuses.

Like the Civil War, soldiers could pay for substitutes to go in their place. William Bryan, related by marriage to the Custers, was a substitute for Henry Countryman who had been drafted. When his wife was extremely ill, Jacob Custer was forced to pay $60 for a substitute to finish the rest of his tour. Joseph Kester [Custer] was a substitute for his brother Conrad Custer in 1780.
The home folks did their part to support the cause. If the army didn’t pay them for what they sold, they filed public claims for payment after the war. On their march to western territories, soldiers passing through the Gap pastured their horses overnight on farms of Sarah Beggs (widow of Thomas) 25 horses for one night, William Fitzwater for 92 horses, and Michael Baker 28 horses. Henry Dove furnished a horse for 37 days, and John Fitzwater furnished 100 pounds beef. Mathias Lair rented his wagon and four horses for 98 days, but his rifle was lost in army service.

Widow Sarah Beggs didn’t receive a widow’s pension based on her husband’s service because she remarried. Other widows were destitute and had to ask the county court for support. For instance, court minutes say Mary Rupe, wife of a soldier, and her seven children were “in great distress” and were granted 25 pounds of money in 1778.
Not everyone wanted to break away from Great Britain. There were Loyalists (Tories) in Rockingham County and even in Brocks Gap.

Rev. Alexander Miller, an Irish Presbyterian minister who lived in the Cooks Creek area, was a man of strong opinions and staunch convictions. (Many of his descendants live at Fulks Run). In 1777, he wrote to newly elected John Poage about why becoming independent of Great Britain was a bad idea. The letter is factual and lays out logical arguments. However, just six months earlier, the General Assembly had made it illegal to speak out in favor of the King or Great Britain. Miller was jailed two years and had to pay the trial’s costs. He was imprisoned in Staunton, which made it hard for his wife to supply the necessaries of life to him.

Nicholas Weatherholtz of the Bergton area, was accused in court of “conspiring and consulting the destruction of the Commonwealth” in March 1779. He and neighbor Martin Whetzel posted a bond of 2,000 pounds. The court minutes don’t say what happened, but other men accused of similar “crimes” only had to post bonds of 100 to 1000 pounds. Weatherholtz must have been cleared because by 1781 he was in good standing and was appointed to appraise neighbor John Ruble’s estate. 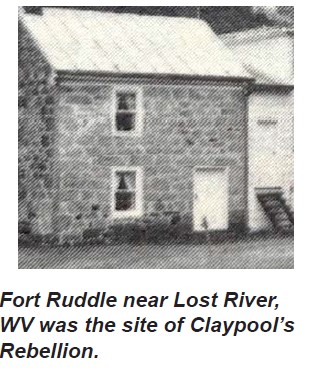 Have you heard of Claypool’s Rebellion? This incident occurred in Hardy County involving former Gap resident John Claypool. It’s a long story. Claypool and other neighbors protested a new military draft and high taxes. Baptist minister Josiah Osburn helped negotiate a brief peace, saying that part of the protest was caused by liquor. Governor Thomas Jefferson was informed of the “dangerous insurrection.” Another protest followed, put down by militia from Frederick County led by General Daniel Morgan and from Rockingham County. The rebellion participants were supposed to be tried in court (with potential death sentences), but the state dropped its case on June 7, 1782.

Men who fought on the wrong side—Hessian soldiers who had fought with Great Britain—eventually settled in the Gap. It was natural that former Hessian soldiers who remained in the United States would settle among German-speaking families already in the Gap. “Hessian John” Baker, Lorenzo Frederick Smith, Frederick Nesselrodt, and Philip Hinkle were Hessians, according to tradition. George May of Bergton was said to have been a Hessian, but recent research proved that he was Irish.

The American history we learned in high school is only a fraction of the whole story. I encourage you to learn more. Internet searches can reveal details and even photographs of places that our ancestors fought.

You will gain a greater appreciation for the citizen soldiers who marched hundreds of miles to secure our country’s independence.