Last month, I introduced you to the world of slow pitch softball that has given me lots of joy throughout the years. Growing up, there was a lesser known but highly competitive league for men in Rockingham County that played fast pitch. The fast pitch style of softball is usually associated with girls and women today. Who could forget JMU’s magical run to the College Softball World Series a few years ago! It was a very enjoyable experience watching these talented young ladies giving their all.

I was around 8 years old when my father told me excitedly of a travelling fast pitch softball team called The King and his Court that was making an appearance in Harrisonburg at Memorial Stadium. What really piqued my 8-year-old attention was the fact that it was only a 4-man team. A pitcher, catcher, and two fielders. What outfit would be crazy and /or good enough to take on a typical 9-man team and think that they had a chance? When your pitcher is named Eddie “The King” Feigner. Eddie, who I will refer to for the rest of this story only as The King, was the absolute best underhanded fast pitch softball pitcher to ever grace God’s green earth. When asked why his team had only 4 members, The King answered that he had been told that no team could take on his pitching so he should reduce the roster to simply himself. The King accepted the dare and originally wanted a 2-man team of himself and a catcher but increased it to 3 in case the opposing team got lucky and managed a hit. He then added a 4th player when he realized that if all his team was on base at the same time, there wouldn’t be anyone left to hit.

He was born in Walla Walla, Washington in 1925. The King started pitching early in life and had perfected his craft until the US Marines decided that they needed him in World War 2. In 1946, he assembled his 4 man all star team and started touring the Pacific Northwest and eventually around the United States. The King’s fastball was clocked as high as 106 mph and was nearly impossible to hit. There were 30-40 different variations of different speed pitches that made even the best hitters look very foolish. He kept meticulous records of his exploits. In 10,112 games, The King and his Court won 9743 times, a winning percentage of around 97%. Toss in the fact that he was 75 years old when he retired after suffering a stroke makes this record even more remarkable. Other stats of note include 147,517 strikeouts, 930 no hitters and 230 perfect games! It wasn’t just all-star teams in every town that he dispatched with his blazing fastball; he was also unhittable against Hall of Fame baseball players. An exhibition game saw him face and strikeout in order, Willie Mays, Willie McCovey, Brooks Robinson, Roberto Clemente, and Harmon Killebrew. Keep in mind that a softball is larger and easier to hit than a baseball. The closest comparison to the King and his Court would have to be the Harlem Globetrotters. The Globetrotters though have another team as a foil to all their tricks and are paid to lose. The teams taking on the King are deadly serious about winning so they can brag to their small-town friends and family for the rest of their lives if they manage to pull off the impossible. “It’s easy for the Globetrotters because the other team plays along,” said The King. “But we get teams that don’t care about the people in the stands, the show, the money, or anything. They just want to beat us. They think the crowd came to see them!”

The big day had finally arrived, and my dad and I got into the Pinto that he had to trade in his 1956 Chevrolet Belair for. The oil embargo of the 70’s was taking place and drove the price of gas up to the point that a big V-8 was no longer practical. Dad watched the 60 Minutes episode about the exploding Pinto’s and promptly put a big flammable triangle sticker on the rear of the car to warn everyone. We met up with both of my grandfather’s who also wanted to watch. This is a testament to how well known The King was that my grandfather’s, the most frugal men I have ever known, each were willing to pay the 3-dollar sum each to witness the spectacle. I witnessed one example of my grandfather’s tightness when I dropped by his house one day and found him squeezing ketchup packets he had asked for from McDonalds into his own bottle. I think he had the same bottle for 25 years and refilled it in this manner the entire time. We took our seats and immediately heard a loud, popping sound. It was the sound of the King’s fastball hitting the catcher’s mitt. The local team, made up of players from the Rockingham County Fast Pitch League, looked defeated before the game even began. The King played it straight the 1st inning, striking out the side on 9 pitches. The King and his Court were not slouches at the plate either and took a 2-0 lead in the bottom of the first.

In the second inning, the King retreated to second base and pitched from there. Same result, 3 pitches, 3 strikes. The next batter came up and the King took the pitchers mound again. This time, one of his teammates appeared with a blindfold and put it around the King’s eyes. The batter looked spooked and watched 3 strikes whizz by without even lifting his bat off his shoulder. He had a no hitter going until the 4th inning when a batter laid down a perfect bunt to spoil it. This made the King unhappy, and the crowd booed mercilessly as he stood smiling on 1st base. He took his lead from first and then I witnessed something I will never forget. The King whipped a pickoff throw BEHIND HIS BACK and the runner was tagged out! The whole crowd waved goodbye to him as he sulked toward the bench with his head down. The King didn’t give up a base runner the rest of the game and won 4-0. Then it was in the station wagon and off to the next town. The team sometimes played three games a day and up to 15 games 7 days a week.

I’ll leave you with a quote from the great Jackie Robinson: “Baseball is like a poker game. Nobody wants to quit when he’s losing; nobody wants you to quit when you are ahead” 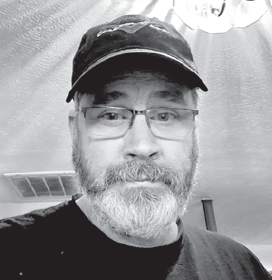 Jeff Watts is a lifelong resident of Rockingham County. He enjoys music, sports, and online business. He lives in Broadway with his wife Kristin, son Nathaniel and daughter Natalie.

Jeff Watts is a lifelong resident of Rockingham County. He enjoys music, sports, and online business. He lives in Broadway with his wife Kristin, son Nathaniel and daughter Natalie.