Lena’s school experiences in the 1930s

“The beginning of school was always a treat for me—playmates, more books, chalk boards, and a whole new world!” my mom Lena Albrite Turner wrote in her memories book.

Lena’s school experiences in the 1930s might seem strange to today’s students. She began school in 1938 when she was almost 8 years old, in one-room Whitmer School near the old Riverside Church. She and the Baker and Crider kids usually walked to school, crossing the North Fork on a swinging bridge before walking the final half-mile to school. On really bad weather days, her father would drive all of them in his Model T.

One teacher taught all the students. Students were assigned grade levels, with text books for each grade. But younger students listened to lessons for older children and could skip a grade if they mastered the material. 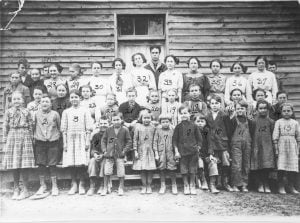 Every day, two students took a bucket on a stick with a notch cut in the center to fetch a pail of water from the neighbor. One bucketful was usually the day’s supply for drinking and washing. The water dipper was a long-handled dried gourd. On Monday, each pupil brought a cup—a snuff glass, tin cup, or jelly glass—used it all week, and took it home on Friday to wash. Forgetful students folded a piece of notebook paper to drink from, which was good for three or four servings. The county installed a cistern in Lena’s final years at Whitmer’s, eliminating the daily walk for water.

Lena enjoyed her elementary years and wrote nine pages of school stories in her memory book, including names of games they played, such as Auntie Over, Three Deep, and Round Town.

Students in other small county schools had similar experiences until the 1950s and early 1960s when consolidated schools replaced small schools.

Schools were even more different in the 1800s and early 1900s. Before 1870, parents had to find and pay for teachers for their children. When mandatory free public schools started in 1870, school boards in each district arranged for school houses and teachers.

On November 3, 1872, school trustees of Brocks Gap District contracted with Naason W. Turner to teach at Good Hope Schoolhouse for five months at $20 per month. School trustees paid $12 ½, and parents had to pay the rest plus furnish brooms, brushes, and fuel for the stove. (Good Hope was on Runions Creek).

In 1883, the Plains District School Board contracted with William May to teach for five months at Fulks Run Schoolhouse for $24 per month. School opened at 8 a.m. and closed at 4 p.m. The district furnished students’ books. Fulks Run Schoolhouse was near the intersection of Little Dry River Road and Third Hill Road.

Not all teachers were conscientious. James Dove (1880-1953) of Bergton tired of teaching his one-room school and just stopped going. His sister Rachel Dove Albrite broke the news to his students that school was over for the year. In Hardy County, the school of Robert R. Souder (1881-1963) became known as “Souder’s Tan Yard” because he whipped each and every one of the students. Soon, student after student stopped attending. Robert continued holding classes and recesses to an empty school until the building burned to the ground. 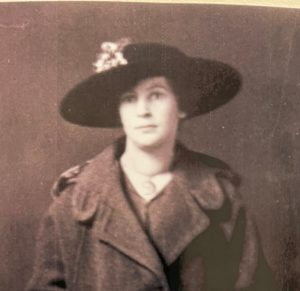 The five-month school term was common. Carl Gray Hoover shared his mother’s school report for 1917-1918. Miss Lena Custer (later Lena Hoover) taught at Oak Grove school near present-day Mountain Grove Church. After training at a summer teacher institute, she signed a 120-day contract. The ungraded curriculum meant children could continue their schooling if their interest and home situation allowed. For advanced schooling, students had to move to Broadway and pay tuition, room, and board.

How could young Lena Custer manage thirty-six students ranging from 6 to 17 years of age? Answer—average daily attendance was only twelve. Students caught mumps, measles, chickenpox, and sometimes deadly diphtheria and typhoid. Three of Lena’s students missed 102 days because of contagious disease. Six missed 50 to 83 days due to other disease. Verdie Custer (later wife of Paul “Mick” Miller) missed 102 days but still passed all her subjects. Students lived between ½ to three miles from school and had to walk in all kinds of weather.

Built of wood in 1882, Oak Grove School cost $350. By 1918, it was worth only $25. Unpainted, it had a bad stove and two broken windows. It was impossible to keep the children comfortable due to the bad stove during twenty days of the year.

Despite a lack of extensive schooling, students from Oak Grove and other rural schools valued education and continued to read and learn throughout their adult lives.

Eating Well in the Real World