The Miller Family of the Genoa Area 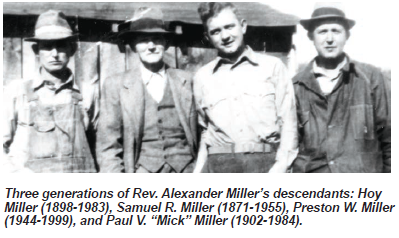 Two different Miller families live in Fulks Run. A Miller family in the Riverside church area moved there before the American Revolutionary War. A John Miller already lived in Brocks Gap when Paul Custer bought a neighboring property in 1772, which was likely near Millers Knob along Route 259. These Millers intermarried with Custer, Whitmer, and Cook families. You may remember some descendants from this family: Mary Miller Whetzel (1925-2014), Ethel Miller (1922-2019), Lena Miller Southerly (1915-1993), L. Paul Miller (1919-1996) and J. Roy Miller (1911-1982). I don’t think there is a published history of this Miller family.

Shirley’s book, Descendants of Rev. Alexander Miller, Pioneer of the Shenandoah Valley of Virginia, features copies of original surveys and deeds. There are even photographs of people who were born in the 1810s. The book is available for sale at Fulks Run Grocery.

Rev. Alexander Miller (about 1720-about 1785) was from Antrim, Ireland and was one of the first Presbyterian ministers in the upper Shenandoah Valley. Official records contain much information about Rev. Miller, unlike many of our Valley ancestors. He was educated in Edinburgh University where he received his Master of Arts degree on March 31, 1740, and was licensed as a minister in 1744. He brought his family to the Valley before 1754 when the area was still the Virginia frontier. He served the Peaked Mountain congregation from 1757 until 1762 and Cooks Creek until 1763 and also served Presbyterian congregations at Edom and Mossy Creek. In 1771, Rev. Miller had several missionary stations in southwestern Virginia and western North Carolina. The family owned several hundred acres in the Cooks Creek area.

Rev. Miller was “a man of strong opinions and staunch convictions and was possessed of an extreme independence of the wills of other men,” according to his descendant, historian Milo Custer. An incident recorded in Virginia Valley Records proves his willingness to speak his mind. In 1757, Miller barged into a service in the Linville Creek Baptist church, took the pulpit, and gave a passionate speech to convince the congregation that they should baptize infants. The church minutes recorded, “…the said Miller and a rude Assembly with him, in a disorderly Manner, without Leave, or previous Notice given to the Church…opened our Meeting House, and assumed our Pulpit, and there slanderously, falsely, and contrary to Christian Rule & Order (did) despitefully use our Minister, and Brother, the Deacon…”

Rev. Miller died about 1785 and was probably buried in the old Cooks Creek church cemetery which was abandoned in later years and flooded by the Silver Lake mill dam. Some of his descendants up to the present day have been members and leaders of the Cooks Creek Presbyterian church.
Rev. Miller’s Fulks Run descendants are from his second son, Samuel Miller (1753-1811). Samuel’s oldest son, Alexander Miller (1787-1841), lived in the Cooks Creek area with his wife and family, but when he died, his widow Ann Matthews Miller bought 105 acres in the Hopkins Gap Road area and moved the family about 1843. Her log home stood in the front yard of Harrison and Naomi Fulk’s home near present-day 16031 Hopkins Gap Road. Four of her children married into the Shoemaker family, and several Miller descendants are buried in the Shoemaker family cemetery which Myron Reedy is currently restoring. 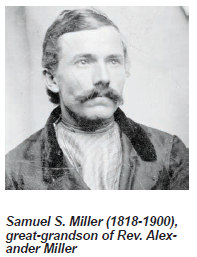 Rev. Alexander Miller’s family flourished in Rockingham County where many of his descendants continue to live, while other descendants were early settlers in Kentucky, Illinois, and other states further west. His Irish roots were a source of pride for the family.

Tax records and deeds often describe his family members as Irish to differentiate them from the German Miller families. Even the obituary of his great-granddaughter-in-law in 1906 mentions that her husband John C. Miller was “of the Irish descent.”