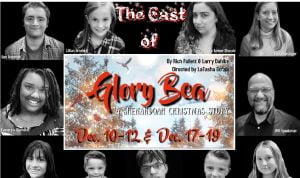 The year 2021 was a hard one for many of us who lost loved ones. Joy seemed to have disappeared from our lives as we mourned the loss of family members and friends, the loss of the way things used to be. Life often didn’t seem fair and certainly didn’t seem to be getting back to normal. Someone described to me that they felt like they were walking around with cotton surrounding them, going through the motions of living but not really being in the moment or feeling anything. As this column is being written right before Christmas, 2021, joy seems allusive. We may sing “Joy to the World” but actually feeling the joy can be difficult, especially when life hands us setbacks and pain. How can we rekindle that joy?

When I read that the Selah Theatre based in Winchester (formerly in Front Royal, VA.) was performing a play which I first saw on December 24, 2012, at the Wayside Theater in December, 2021, I decided that I must see it. In 2012, when my husband and I came out of the Wayside Theatre that Christmas Eve, snow was magically falling. Life was joyful! Selah Theatre presented the play twice in Front Royal. The play meant so much to my sister and I when we went in December, 2018, after our mother died that November. Our mother loved her cardinals on her rural farm, which she called “redbirds.” I have now seen the play four times, and each time it brings me joy, even as I shed tears of sadness.

The play, Glory Bea! A Shenandoah Christmas Story, was inspired by the song “Shenandoah Christmas,” written and performed by Rich Follett. Follett and co-author Larry Dahlke were actors in the Wayside show Forever Plaid and got along so well that according to Follett after a “lively dressing room dialogue that we should write a show together.” Dahlke replied, “I dare you … get started” says Follett, and they got started writing! Follett says the words in his song “redbirds in the cedar” led to the redbirds being three angels several times in the play.

To be sure that the show was historically accurate, Follett researched weather reports, train schedules, and many other details from the era of the Great Depression in the 1930s. The story centers on the father who goes to work in the Blue Ridge mountains building the Shenandoah National Park and Skyline Drive with the Civilian Conservation Corps to provide for his family tries to keep his promise to get home by Christmas even as the Blizzard of 1933 shuts down the “Good News Train,” and his pregnant wife who with their young daughter struggles to keep the farm going, and get caught in a snowstorm too when out to get a Christmas tree for the church. The wife goes into labor and sends daughter Gloria Beatrice to fetch the doctor in the snow. Miracles happen in the end.

In Maria Kondo’s book The Life-Changing Magic of Tidying Up: The Japanese Art of De-cluttering and Organizing, she talks about choosing what items to keep when trying to simplify one’s life. She advises her readers not to focus on what to discard, but to cherish the things that one loves. She directs us to “take each item in one’s hand and ask: ‘Does this spark joy?’ If it does, keep it. If not, dispose of it.”

Perhaps we need to start the New Year by focusing on what “sparks joy” for us, not just the things in our lives, but the people and the experiences which can sustain us. My husband enjoyed the play the first time, but it did not “spark joy” enough for him to attend more than once. Once was enough for my sister, too. But for me, seeing Glory Bea! A Shenandoah Christmas, continues to bring joy, perhaps because I have worked with Rich Follett who is a National Board Certified Teacher in English for Young Adults and have enjoyed his singing in two of the performances of Glory Bea!, at a state Teacher of the Year banquet, and in other venues.

Driving home from Lord Fairfax Community College’s Willliam H. McCoy Theatre in Middletown, near the now closed Wayside Theatre where I first saw the play, I played my CD of “Shenandoah Christmas” on repeat. Singing along, I felt the “Joy, joy, joy, joy, down in my heart” as we used to sing at Bible School. Even when we despair of being joyful again, we can experience joy by finding a spark! I hope that YOU can find a spark of joy in 2022!