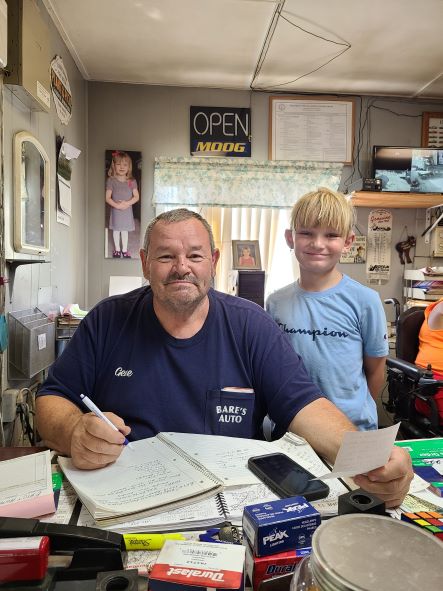 Fulks Run may be small, but you can find everything you need right in town. No big box stores, but there are a few small local businesses that cover all your needs, plus a gas station, a post office, and an elementary school. This month’s business has been around since April of 1994. A self- made man, Gene Bare of Fulks Run owns Bare’s Auto and Small Engine Repair, right off Third Hill Rd, in Fulks Run. Gene grew up in Fulks Run on Genoa Road.

He went to Broadway High School, and in 1976 married
his sweetheart, Debra Jean. They have 2 children, Tammy and Wesley, and 4 grandchildren – Callen, Carley, Autumn, and Kaylee. When Gene got his drivers’ license, in order to keep driving, he had to make his own repairs when his car would break down- on the job training! His first car, as he recalls, was a Volkswagen. Gene’s first job was with Roadcap’s Live Poultry, catching chickens and loading the truck. Then, he moved on to Mauzy Poultry, delivering shavings and litter. From 1976 to 1998, Gene worked for Rockingham Poultry Ice Plant, (now Pilgrim’s) spending the last 9 years of that time in the pallet, jack, and fork lift shop in the Broadway plant.

This is where he got his experience in running a business. April of 1994, he started working on cars part time, taking automotive repair classes along the way. Eventually, it became his full time business. It was just Gene and his son, Wes, doing the repairs. The shop repairs any small engines also – like tillers, weed eaters, lawn mowers, etc. The shop is set on about 6 acres just steps from their home. Along with the long running automotive shop, Gene has two other businesses. He and his wife Debra bought their first rental property in 1999/2000. They now own 30 rental properties in Fulks Run, Broadway, and Mathias, both mobile homes and houses.

As of this writing, they just closed on another house and property in Fulks Run. Gene and Deb’s third side hustle is storage rental. They have 98 rental units conveniently located on Rte 259 in Fulks Run. In May 2014, while working on his mini storage units, Gene was shot and had to be choppered out to the hospital. The shooter was charged with reckless use of a firearm and spent 30 days in jail. Gene spent 109 days in UVA. He still carries the scars and the bullet, but it hasn’t slowed him down any! The first of the month is very busy in the Bare’s Auto office for office manager, Debra, when rents are due. Along with managing the auto repair business, billing, handling all the paperwork, and answering the phone, Deb always has something to do! To help with the business, Gene has two full time auto shop employees. James Rice has been with Gene for 20 years, and Barry Wimer has worked there 2 years.

The shop is open Monday through Friday, 8am-5pm. Good reputation, fair prices, good work. We have been taking our vehicles there since we moved here. Towing is also available in the off times, if Gene is in the area. He works on all kinds of motors and sells refurbished mowers and other things. Convenient for Fulks Run residents, Bare’s Auto is also an inspection station. Along with being a welcome hangout for locals and customers, while waiting for their vehicles to be worked on, there have been a few after hours card games happening there from time to time. Gene admitted it has been a while since he held a customer appreciation day, so there may be one coming! Stay tuned! For all your auto repair needs, call Gene at 540-896-2898. See his full page ad here in The Chronicle.