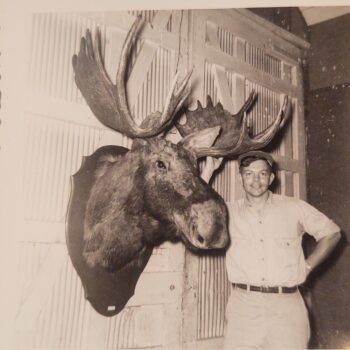 As many know, my father operated Bowers’ Taxidermy for over 60 years. Not only was his work iconic, but his shop became a landmark along the Valley Pike. I consider it a privilege to have been his son. Dad’s shop was always fascinating as customers brought in a wide array of critters. African Cape Buffalo, Alaskan Caribou, and Montana Elk are but a few of the big game species dad mounted over the years. From time to time, successful hunters would also bring in moose.

These largest members of the deer family can stand seven feet tall and weigh up to 1600 pounds. Males grow large palmate antlers weighing an astounding forty pounds or more and are quite a trophy. Each year, dad had a handful of these beasts to mount and several are still hanging in cathedral ceilinged living rooms, Moose Lodges, and old barns.

After initially preparing the hide, it generally took him a full day to set the antlers, model the eyes,
arrange the ears, position the skin, and sew it up. After it dried, much
more time was needed to finish it up. Moose were a lot of work. After having mounted one of these gargantuan animals the day before, imagine dad’s
horror the next morning when he arrived at the shop and found the
old boy with his head bowed as if in solemn prayer.

The hollow manufactured manikin made of layered building paper and paste had absorbed moisture from the hide and collapsed under the weight of the massive antlers. That was not a good day at Bowers’ Taxidermy. The other work dad had planned was pushed aside as he methodically deconstructed all of his previous day’s labor in preparation to remount the head. Ever afterward, he reinforced every moose headform with two by fours as well as polyurethane foam. He never wanted to experience that massive frustration again and he didn’t. Even though this was very aggravating and discouraging, dad took it in stride. He immediately went to work to fix the problem instead of trying to fix the blame. He just did what needed to be done and the end result was another spectacular moose mount. There was little laughter that day, but there was much in the years to come whenever we remembered the praying moose.

Although the mounted head was an inanimate object, similar situations occur with human beings. Individuals
we trust and depend on unexpectedly let us down and we become discouraged and disappointed. In some situations, it may be a relationship we spent not a day, but months or even years building, only to see it collapse
overnight. Like Dad, we need to roll up our sleeves and go to work. Instead of giving up and walking away, what can we learn and how can we benefit from it going forward? How can we salvage certain aspects and use them to reconstruct future friendships that could be more durable? Certainly relationships are different from moose heads in that both parties have to be cooperative and desire improvement. But let’s be sure we’re not the ones resisting opportunities for healing and growth. Ultimately, this incident reminds me of how our Heavenly Father never gives up on us. After sacrificing His Son to save us and investing Himself entirely in our lives, we frequently disappoint Him by making choices that contradict His will. Thankfully, He’s willing to continue to work with us providing reinforcement where needed and continually remaking us into something better than ever before.
As we reflect on the praying moose of Bowers’ Taxidermy, let’s remember to keep working at situations and relationships and let’s allow our Heavenly Father to keep doing His work in us as well. Blessings, George