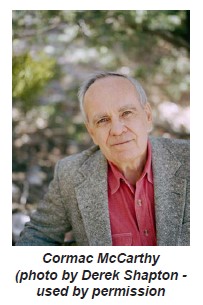 Cormac McCarthy, born in July 1933, may be the greatest US novelist living today. He would not call himself a Southern writer, having lived outside the South for more than 40 years; however, he began with novels about the East Tennessee area where he grew up, and Suttree (1979) is certainly a Southern novel. It is not McCarthy’s most critically acclaimed novel–that designation falls to either Blood Meridian (1985) or The Road (2006); and, it is certainly not the novel that lead him to the popular success he is has enjoyed for the past thirty years. That novel is All the Pretty Horses (1992).
Although he grew up in Knoxville, Tennessee, Cormac McCarthy was born in Providence, Rhode Island. His family (He was one of six children of Roman Catholic parents) moved to Tennessee in 1937 where his father worked as a lawyer for the Tennessee Valley Authority. McCarthy went to public school in Knoxville and studied twice at the University of Tennessee without taking a degree. He first left in 1953 to join the Air Force. When he returned to college in 1957, he wrote two prize-winning short stories, but left college again in 1959 to move to Chicago.
In 1961, McCarthy married a college classmate, Lee Holleman and moved back to Tennessee, living a primitive existence in the Smoky Mountains outside Knoxville. They had a son Cullen in 1962, but the marriage failed when he urged her to support him financially so that he could focus on his writing. A divorce followed; she moved to Wyoming where she raised their son, worked as a teacher, and became a published poet. McCarthy married twice more, but both marriages ended in divorce. He fathered a second son with his third wife: John, born in 1999.. Raising John influenced McCarthy to write The Road.
McCarthy’s first published novel was The Orchard Keeper (1965). With no agent, he submitted the manuscript directly to Albert Erskine at Random House. Erskine accepted the novel and became McCarthy’s long-time editor. In 1966, The Orchard Keeper won a William Faulkner Foundation Award for an outstanding first novel, but it gained few readers. Set in rural East Tennessee, the novel feature roughshod characters, understated prose, and concern for the environment.
Recognized from the beginning as a literary artist, McCarthy won awards that enabled him to survive. He has never much cared about material possessions, preferring to stay on the road, living a simple existence. His early novels gained little-to-no popular success. Before All the Pretty Horses, none of them sold more than 5,000 copies. He wrote three more novels set in East Tennessee–Outer Dark (1968), Child of God (1973) and Suttree (1979). After writing this novel, McCarthy left East Tennessee behind, moving first to Texas and later to Santa Fe, New Mexico, where he continues to live today. He published his extraordinary western novel, Blood Meridian, in 1986. In Santa Fe, McCarthy became interested in the Santa Fe Institute, a multi-disciplinary “think tank” and is currently on their Board of Trustees.
Publication of All the Pretty Horses in 1992, led McCarthy to popular fame. That novel won the National Book Critics Circle Award and sold 190,000 hardcover copies within six months. Bought by Hollywood, it became a movie, directed by Billy Bob Thornton and starring Matt Damon and Penelope Cruz. McCarthy wrote two more Western novels after All The Pretty Horses: The Crossing (1994) and Cities of the Plain (1998). He followed those with No Country for Old Men (2005) and The Road (2006).
No Country for Old Men, which McCarthy first wrote as a film script, became a highly successful Coen brothers movie starring Tommy Lee Jones, James Brolin and Javier Bardom. The film grossed $171 million world-wide. The Road won McCarthy the Pulitzer Prize for fiction; it, too, became a movie, but was less successful than No Country for Old Men. Readers have waited for almost ten years for the publication of McCarthy’s most recent works: The Passenger and Stella Maris, bothreleased this year. Besides twelve novels, McCarthy has written five screenplays and two plays. The Sunset Limited, a highly dramatic treatment of Belief versus Agnosticism starred Tommy Lee Jones and Samuel L. Jackson; it aired on HBO in 2011. In 2017, McCarthy published a fascinating study about the origin of language, “The Kekule Problem.”
Suttree is a contemporary picaresque novel, a novel that features a somewhat less-than-attractive central character who experiences numerous adventures. Cornelius Suttree lives an adventure-filled life on the banks of the Tennessee River. A somewhat autobiographical character, Suttree, like McCarthy, has abandoned an upper-middle class family to live among underclass Knoxvillians. Suttree has also abandoned a wife and child. He remains troubled about his loss of family, particularly that of his twin brother who died early and his young wife and son. But, making a scant living as a fisherman, he creates a new family, people who see him as a sort if hero
Readers meet Suttree as he watches local police pull a man, who has committed suicide, from the river. Suttree soon befriends Gene Harrogate who provides a good deal of comic relief to the novel. McCarthy’s treatment of Suttree’s misfit acquaintances put the author well ahead of his time in his understanding of African-American characters, sex-workers and homosexuals. . McCarthy gives attention to people often disregarded by members of the upper classes.
Suttree is long, episodic, and full of highly descriptive passages that show how well McCarthy knew Knoxville, its environs, and its inhabitants. Both McCarthy and his character clearly benefit from their years spent in Tennessee, and both the author and his central character ultimately head West in search of a better life.