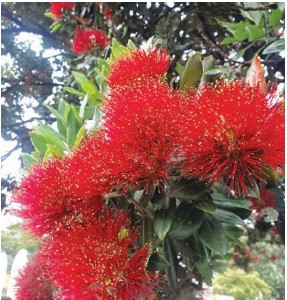 Kia Ora! I’m writing this from lovely Wainuiomata, New Zealand on a warm summer’s day at the end of December. Because gardening is at a minimum at this time of year, and our family finds itself in the Land of the Long White Cloud, I thought it appropriate to write about New Zealand’s Christmas Tree: the pōhutukawa.

The last time I was in this beautiful country it was wintertime, and thus I did not get to see the pōhutukawa (po-hoo-ta-kah-wah) in its full glory. The streets are lined with these breathtaking plants, and their festive dark red flowers in contrast with the bright green make them extra festive for the holiday season. These trees can get to about 60 feet tall, and bloom in November and last through early January, and are found primarily in coastal towns throughout the country. They are part of the myrtle family, which span over 3000 separate species!

While beautiful in its native habitat, which is primarily the North Island of New Zealand, the pōhutukawa is actually seen as a medium level weed in the South Island and the over-planting of it as a garden variety has even started wreaking havoc on the sewage systems and pavement in California! Its hearty nature is what has helped it survive where it is “supposed” to be and has a result proven difficult to get rid of in places where it should not be.

There are many ideas as to why the pōhutukawa has the lovely moniker that it does. One translation of the word comes to “splashed by the spray” which is a nod to the plant’s native environment, the coast. It may also have a reference to the hutukawa, which is a feathered headdress that Maori Te Arawa captains wore on their canoe excursions. Regardless of the origin, the pōhutukawa has a really neat name. 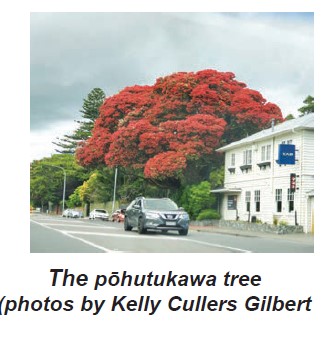 As with most trees and shrubs found anywhere, the pōhutukawa has several medicinal qualities. The Maori have historically used its nectar to help with sore throats, and its bark can be added into a decoction to aid with dysentery! Museum artifacts show the Maori people used the wood from the pōhutukawa for a variety of tools such as hammers, clubs, and boat paddles. Europeans prized the wood for building ships because of its natural bends and immunity to sea worms. Honey produced from the nectar of the pōhutukawa tree is said to be extra sweet, and it even caught the eye of the late Queen Elizabeth II who would make a yearly order of pōhutukawa honey from Rangitoto Island.

The Maori people of New Zealand have a few legends surrounding this tree and its sister plant the rātā. Legend has it that the great Maori warrior, Tawhaki, attempted to avenge his father’s death by finding the entry into Heaven. He subsequently fell to earth and the crimson flowers are said to represent his blood. Additionally, another legend has it the nearly 800-year-old pōhutukawa tree near Cape Regina serves as the gateway for disembodied spirits to pass from this world into the next.

According to my mother-in-law, some local lore is that if the pōhutukawa trees are in full bloom, it means a long summer is ahead. Thankfully for us, the trees are out in full bloom and have made the landscape all the more beautiful. We are enjoying this summertime Christmas season, and I hope that as you are reading this article, the memories you have of this year’s holiday are still fresh and lovely in your mind. Meri Kirihimete and Happy New Year!

Kelly Gilbert resides in Centreville with her Kiwi husband and fairy child Iva. When not daydreaming about a perfect garden, you can find her at Chantilly Library masquerading as a youth services librarian.