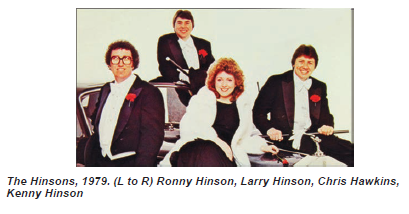 When it comes to ‘innovators’ in southern gospel music, especially in the seventies and eighties, many fans will point to the Hinsons. In the course of a twenty-year career, this family group revolutionized the genre with modern country overtones, and a presentation style that many deemed ‘radical’.

Our journey begins in 1967, when a group of siblings – Ronny, Kenny, Larry, and Yvonne – begin singing locally in their home state of…California. This is rather unusual considering how many groups, even to this day, are largely based out of the southeast. Their first official record was released in 1970, Here Come The Hinsons. Like many other ‘local’ or ‘regional’ groups, this recording was a great introduction to the Hinsons, but lacked much original material, it was largely the Hinsons performing or ‘covering’ popular gospel songs of the time.

But later on that year, a then-twenty-four year-old Ronny Hinson tries his hand at writing a song. He comes up with a lyric that compares Jesus to a lighthouse, a guide to those who are lost. The song was titled “The Lighthouse”, and almost never came to be. As Ronny recalls the story, they were combing through a church hymnal late one night, searching for material to perform, to no avail. Ronny mentioned that he was going to the restroom, and stated that when he returned, he would have in his hand a ‘new song’. Several minutes later, he returned with some words scribbled on toilet paper. The others thought it was a joke, and so they crumpled it up and threw it in the trash can.

They continued going through the hymnal, still unable to find the ‘right’ song. Finally, out of options, brother Kenny picked up that wadded piece of paper from the trash and discovered what would soon become one of southern gospel’s most legendary songs.

The Hinsons recorded the song in 1971 as part of their Sing About The Lighthouse record, but it would be the Happy Goodmans who would take it to number-one on the national Singing News Charts; it would be voted Song of the Year at the 1972 Singing News Fan Awards, and would make its writer, Ronny Hinson, a household name.

With the success of “The Lighthouse”, many began to pay attention to this new group, the Hinsons. Being a family group, the lineup did not change all that often, but there were a few. By 1974, sister Yvonne had decided to take some time off the road, and so the Hinsons welcomed a non-family member, a young lady named Christina “Chris” Hawkins. Chris’ vocals would lend to the Hinsons sound for the remainder of the seventies.

For many, the Hinsons ‘breakthrough’ record was their 1974 release Touch Of Hinson, Glimpse Of Glory. With songs written by either Ronny or Kenny, this album was a blend of up-tempo numbers such as “Hallelujah Meeting” and “Sea Walker”, and ballads like “That I Could Still Go Free”.

What set the Hinsons apart from other groups? A few things, namely their choice of instruments, including heavy use of steel and electric guitars, giving their music a ‘modern’ country flavor. It also wasn’t long until many began to compare the voice of Kenny Hinson to that of noted country singer Merle Haggard. Kenny noted in a 1979 interview that, yes he knew about Merle and recognized the similarities, but made it clear it was not intentional, just natural.

The ‘pinnacle’ of the 1970s Hinsons, and the all-time favorite album for many Hinsons fans, was their 1976 release – From Out Of The West They Came – Live On Stage – their very first live album, a two-record set recorded in Fresno, California. Here, many got their first taste of a Hinsons concert experience. Aside from the music, this album provided us a glimpse into their ministry and evangelism; it demonstrated Ronny’s abilities not only as emcee, but also as a minister – preaching a short sermon in between verses of a song or two. Sometimes the message was subdued, other times it was borderline shouting.

And here is where the Hinsons began to receive some criticism for their presentation style, especially the preaching which some deemed ‘radical’. Yes, it was something that was not common at the time in the southern gospel circuit, but it was immensely popular with fans, and is what drew many to the Hinsons. In fact, Ronny would later mock their criticisms on their 1984 live record:

“Some said, ‘Well, now, that’s carrying it a little bit too far.’ You ain’t seen nothing to how far Jesus is gonna carry me one day. [Or they say] ‘Well it’s just beside me why anybody would want to do something like that.’ Well, when it stops getting beside you and starts getting inside you, you’re gonna know why we do something like that.”

The Hinsons had found their ‘own’ style: their lyrics, their arrangements, and their ministry. The rest of the seventies would give us hit songs like “Campmeeting Days”, “Too Many Times”, and “The God That Cannot Fail”, just to name a few.

But some lineup changes were on the way for the 1980s, and some experiments in musical stylings. Still, though, the Hinsons would remain one of the top-rated groups in all of southern gospel. We’ll continue the story next week!

The Thing About Kittens