The Thing About Kittens

Being in our 70s, we had decided that we wouldn’t get any pets that could outlive us. It came as a surprise to me when our son, Ben, talked Al into two kittens from a cat colony where he parked his big rig. We named the tabby with white markings Gertie. The black and white we named Tux. The thing about kittens is that they all start out as adorable little fluff balls, but their personalities and quirks arrive later.
For instance, their eating habits have evolved since they arrived. Eating off a cardboard slab anything the truckers threw at them made them excellent eaters. Initially, they ate anything we gave them. But as time went by, their palates became more refined. We gave them wet and dry cat food, but they started to prefer only one canned brand and the seafood flavors. After a few months, we bought the large box with forty-two cans. All went well until we noticed they didn’t like one of the fish flavors. About three months later, they narrowed their choice to only two of the four flavors. Being in the Valley, I found a good supply of cat owners, and the swapping began. 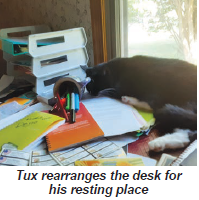 A friend recommended some alternatives, like a brand that was almost $2 for a tiny portion which they rejected, to my relief. She also suggested a jar of baby food, but it was a complete fail. Gertie sniffed it, then walked away. Tux spent five minutes trying to cover the sample with a leaf he found on the doormat. The last was a special treat in a pouch. It consisted of a tablespoon of slimy goo and a few specks of fish sold for a dollar each. Oh, boy, did they love that slime! The biggest problem is that the simple instructions on opening the packet leave much waste inside. So I cut the package on three sides and scraped out leftovers with the edge of the scissors. One morning I thought, why not cut it on all four sides and then turn them over on the plate so the cats can each lick their portion? When I announced the treat, they came bopping up to the plate. But when they saw the inside of the shiny foil packets, they both jumped into the air, collided, then darted from the room.

There is no rhyme or reason for how they exit the house. We have three doors on the main floor, and they wait by one of them. When I open the door, they sit on the rug and decide. It can take a while. Sometimes, they decide it’s the wrong door for that day and go to another. One thing they agree on: they like to come in by the living room window above the porch. It has a lovely wide stone edge and there is room for two.

At night, though they are within a few feet of each other in the living room, Gertie will travel from the living room around the hallway to the basement door, and Tux will dart through the kitchen by the same hallway to the same door.
We have a large, aging deck that looks nice from the road. Located on the south side of the house which is hot as the blazes in the summer. The cats spend a lot of time there in the evening. Walking along the railing, two stories high, Tux tests my blood pressure most days.

They seem to have lost all of the survival skills they learned in the colony, with trucks coming and going around them. Recently, when about a dozen turkey buzzards filled the trees around the deck, Tux climbed onto our high-pitched roof to be safe from those flying things. Gertie often curls up in the middle of our long driveway, playing chicken with any vehicle that tries to enter.

Tux holds the gold medal of the two cats for unique sleeping places. One day we spent 5 hours looking for him only to find him curled up on a black bag in the computer room. We must have walked by him five times. He had his back toward us and his white parts hidden. Another time he squeezed into a 10 x 4 x 2’’ Fig Newton box by the fireplace and slept for three hours. He learned to open a low cabinet with his paw and clear a pile of DVDs onto the floor. We relocated the DVDs. He only opens the door enough to squeeze in. The door shut behind him as he crawled back in to nap. This week, he has chosen the upstairs bathtub. I’m assuming he is practicing for a tornado. We are watching the weather closely.