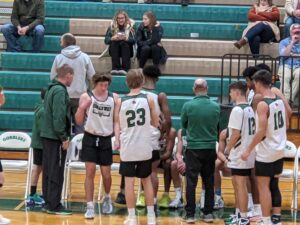 There is something about basketball season. Something about the way the ball sounds hitting the hardwood, or the swish of the perfect shot going through the net. Basketball is different. Basketball is what keeps us warm during the cold, snowy months of the winter. Unlike most other sports, being at a live basketball game puts you close to the action. Just feet from players, hearing the communication on the court and hearing the same sounds as the players gets fans more involved and invested in the game. It was Basketball that brought Broadway High School its first State Championship trophy, back in 2017. Basketball signals the changing seasons, as autumn rolls into winter, as the leaves fall off the trees, the sound of each dribble is like a drumbeat, leading fans into the gym.

The Broadway Gobblers Boys and Girls Basketball teams kick off their respective seasons in late November, and the Gobblers Sports Network is the home for 20 basketball broadcasts this winter!

The BHS Girls are under the direction of Head Coach Jeremy Fulk, who enters his second season on the sidelines for the Gobblers and is looking to lead his young team to the Region 3C Tournament. The Gobblers feature a combination of experienced leaders and fresh faces that the coaching staff hopes to meld into a cohesive unit, with a sharp-shooting, fast paced offense, and a suffocating defense. The Gobblers will be led by five familiar faces. Sophomore Wren Wheeler is the leading returning scorer for the Gobblers this season. Wheeler, who averaged 13.3 points per game as a freshman, will look to continue her stellar play into her second season on the varsity squad. Throughout the 2021-2022 season, Wheeler made more Free Throws (79) than any other BHS player attempted. In addition to being the leading returning scorer, Wheeler also pulled down 6.2 rebounds and dished out 1.6 assists last season. Also returning for the Gobblers this season will be Seniors Lindsey Wimer and Lily Gatesman and Juniors Maya Bacon and Alexa Dingus. The team also features a large group of newcomers this season. Sophomores Jerin Billmeyer and Savannah Janzen will be joined by Freshmen Kaley Runion, April Gingerich, Lilah Deavers and Hannah Tinnell.

The BHS Girls, looking to improve on their 7-12 finish from a season ago, will open this season on November 28 when they host Waynesboro. The BHS Girls schedule features multiple playoff teams including dates with 2022 Group AA State Runner-Up Buffalo Gap. The Valley District promises to be a gauntlet again this year. The Gobblers will face a trio of Playoffs teams from last season including Spotswood, a team that advanced to the Group AAA State Tournament in March. The Gobblers begin Valley District play when they host Spotswood on January 6.

The Broadway Boys Basketball Team is looking to continue their most recent run of success under longtime Head Coach Dwight Walton. The Gobblers have advanced to the Region 3C Tournament in two of the last three seasons and will look to use a variety of returning players as well as new faces to accomplish that goal again this season.

What are your Christmas Traditions?