What are your Christmas Traditions?

Christmas traditions have changed over the years, but I imagine all of us have a special memory of the holidays that brings a smile as we recall it. Some folks shared their favorite Christmas memories in the stories below. No fireplace to hang stockings for Santa? No problem. In the early 1920s at Herman B. Turner’s Fulks Run home, he and his siblings set their plates on the dining room table for Santa to put their gifts. “Our presents on our plates was only perhaps a pencil, an orange (a real treat), some home-made candy, and sometimes a wind up toy or some bought stick candy.” Herman (1914-2002), wrote in his memory book that “Gifts of bought things were rare. Money was very scarce and hard to come by. In a home where ten children were growing up back then, the whole family had learned to cope with the realities in which everyone, including our neighbors, would experience the impact which affected our livelihood. Yet, everyone was happy.”

In the 1930s, Lloyd and Ruth Turner’s children put out their caps for Santa. Gifford Turner recalled that “Christmas time was always enjoyable but no big affair as far as presents were concerned. We would ‘set our caps’ behind the stove on Christmas Eve. Santa’s presents were usually an orange, some candy, a toy or two and maybe a game, etc.” His younger brother Wayne A. Turner treasured a little green truck he received when he was eight years old. Their sister Vada Turner May usually got a small doll and some candy. Vada added that their grandmother Clara Kline Turner Breneman gave each grandchild an envelope with $1.00

Christmas Trees
I don’t know when Christmas trees became popular in Brocks Gap. A picture from about 1902 shows a tree in the Lutheran church decorated with ribbons, gloves, scarves, and other practical items. Cedar trees cut from the field were popular. Mary Morris Turner “had already picked out a potential cedar tree from the car on our travels thru Hopkins Gap to church at Gospel Hill. Then on a Sunday afternoon we would check them all out and select the perfect one that didn’t have a double top,” according to her son Gary Turner. A family trek to choose the best tree was also the tradition in Phoebe Wine Amos’ family.

Some families made strings of popcorn roping or red and green paper chains. Gayle Lee Davis shared, “My mother [Hazel Lee] used to make ‘snow’ on the branches of our cedar Christmas tree. Using Ivory Flakes soap, she would make a thick froth and, using her hands, grab a branch at the base and pull, leaving a layer of ‘snow’ on each branch. After it dried, we would decorate it.” 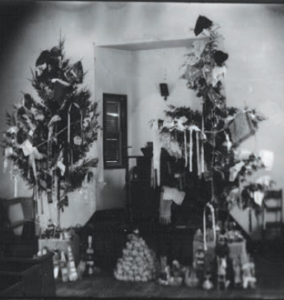 In the 1930s, Lena Albrite Turner’s family did not have a Christmas tree until she was old enough to cut one herself and decorate it with her homemade ornaments. When she woke on Christmas morning, her father had surprised her with a beautiful cedar tree with a dozen store-bought balls he had borrowed from his sister. “It made a little girl happy,”Lena remembered.

Nancy Smith’s family decorated their hand-cut cedar with icicles and cotton balls. Sue Smith’s tree was cedar, filled with the five children’s hand-made decorations. In 1961 my family had a very short tree on a tabletop out of the reach of my baby sister Audrey, who wanted to play with shiny but breakable Christmas ornaments. Her love of Christmas decorations has continued, and today her home is filled with beautiful decorations from November through New Year’s Day.

Food plays a special part of the holiday season in many families. In 1937, Ellen Ritchie Carr hosted her children and grandchildren for a delicious Christmas dinner. Her son Blaine Carr as Santa distributed gifts. Other families made special Christmas breakfasts, like Phoebe Wine Amos’s family who always ate fried oysters.

In my childhood years at Mt. Carmel EUB, our Christmas program in early December featured children’s recitations and songs. Children of all ages (and there were many little Baby Boomers then) recited a memorized poem or “piece” during the service. Some local churches presented evening Christmas music programs during December, but I don’t remember any Christmas Eve services. On the Sunday before Christmas, congregations like Mt. Carmel EUB and Valley View Mennonite gave everyone present a bag of hard candy and an orange.

May you and yours make many beautiful memories this holiday season.