What brings together 70 or more students and 25 or more adults to build sets and sew costumes, creating a fantasy world so student actors can share a storyline while singing and dancing to a live orchestra? What keeps all involved working outside of school hours for three months, for 40 or more rehearsals, for over 120 or more hours? MUSICAL of course!!! Musical season is one of my favorite times of year. It is incredible how the show comes together from auditions and a basic read through out of the script, to the polished and professional “finished product” that the audience gets to see during show week.

The cast members learn whatever skills are necessary for their roles on stage. Students with no prior training will jump right in to learn blocking and memorize lines, though they may need to learn to speak with an accent or even learn to dance. Sometimes students add in special skills such as juggling, walking on stilts or even doing acrobatics to fulfill their character. Many but not all students are enrolled in the Choir program, though all cast members will be properly trained under Mrs Townsend’s direction, and many become quite skilled in singing. Students who are not already enrolled in Choir often find their way into the Choral program because of their awesome experience during Musical. 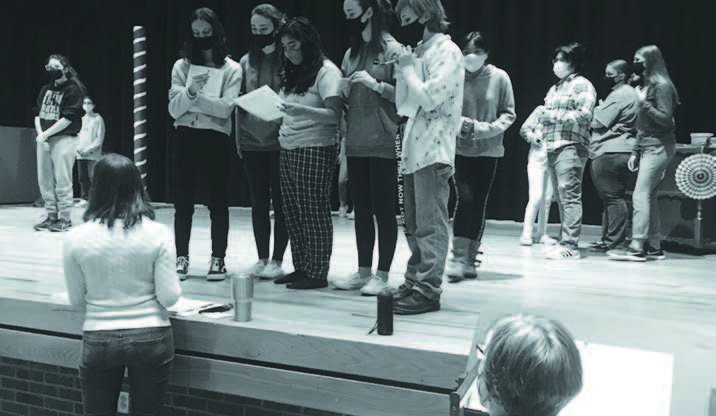 The unsung heroes of Musical include the behind the scenes folks, including the shop class and instructor who build the sets, and the art students and instructor who paint the sets and backdrop. The stage crew make visual magic happen on stage, like changing a town into a library, into a forest, into a palace, even into an undersea magical grotto; they can make it rain, create a river, make people fly, make a train chug through or a hot air balloon float past, even keep track of disappearing characters or make a car fly, all without being noticed as the actors live out their stories on stage. The lighting and sound technicians create “the atmosphere” for the cast by creating sunsets, daylight, night time and snowstorms, and visually supporting emotion by illuminating the happiness and sadness of the characters, not to mention pulling off other amazing special effects throughout the show. The piano accompanist and orchestra weave it all together by providing the soundtrack the cast performs to, as they tell their tale.

The vision of the entire show falls to the BHS Co Directors, Claire Covington and Kaitlyn Townsend. Sets are created by a team of volunteers, and the lights are designed by instructor Corey Hostettler. Martha Maddox lends her hand to all things artistic, and Rachel Herrick handles costumes and hair/makeup design. Choreography is being designed by Emily Parkinson (with several students creating pieces), and the Orchestra Director is Candice Flake. We hope you will join us for the 2022 BHS musical performance of Tuck Everlasting, February 17-20. https://www.showtix4u.com/events/BroadwayHS