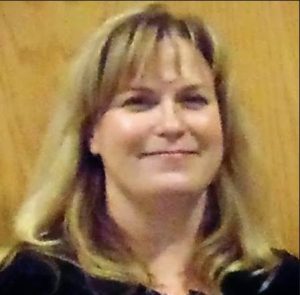 The start of the new school year is coming up so quickly, it is hard to believe that the Broadway High School Marching Band starts full rehearsals in camp on August 1st! Soon, BHS and JFH Band and Choral Directors will begin rehearsals, preparing our members for Veterans Day and Holiday celebrations, Concerts, Musicals and more. We are excited to welcome the newest members
of the BHS Music Department staff, and wanted to take this opportunity to introduce our new high school folks, along with the middle school directors. Be sure to say hello when you see us out and about, we can’t wait to make music with your kids! 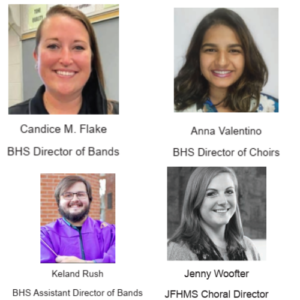 2022-2023 will be Jenny Woofter’s fifth year teaching at JFHMS. Originally from Woodstock, VA, she previously worked in the arts administration field in Washington D.C. and Charlottesville, and then returned to the valley to become a teacher. She now lives in Harrisonburg with her husband, Scott, and her 14 month-old daughter,
Madelyn. In addition to leading the JFH Choirs, Jenny is also the Director of the JFHMS Musical. She has been participating in musical theatre since she herself was a middle schooler, whether it be as a performer, a music director, or as an audience member.
“Getting to work with the group of adults and students while putting our musical together is a                                                                                   career highlight!” – Jenny Woofter
Cathy Clare Brown
After studying flute at JMU and marching four seasons with the Marching Royal Dukes, Cathy Clare Brown finished her degree at Bridgewater College and began her career as an assistant to her mentor James C. Wampler at Turner Ashby HS. Cathy has been the Band Director at JFHMS since1996. She is an active performer in several local performing groups including the Valley Wind Ensemble, the Harrisonburg Rockingham Concert Band, the HRCB Flute Choir and the BHS Pit Orchestra. Cathy is married to Steven, and they have two amazing daughters,
Morgan (20), and Lily (15) and two dorky doodles, Linus and Jenny Mae. Cathy is a proud Band parent, and works behind the scenes as Producer of the JFHMS Musical. She is the founder of the  “Bands of Hope” MS Walk team, and the “Dovel Memorial Music Scholarship”, through the REFI foundation.
Favorite quote: “There is no ‘bench’ in Band. In Band, everyone gets to play”.

Zoorama: An Animal Exhibition in the Shenandoah Valley