J. Frank Hillyard Middle School originated from the former faculty and students of John C. Myers Middle School; in June of 1998, the teachers and staff completed the move. After the dust settled, we found ourselves in a remarkable facility for a middle school. After years of setting up metal chairs in the JCM gym each time there was a performance, Choral Director Sharon Wampler was excited to finally have an auditorium, and decided to put it to good use. The first JFHMS musical production was “Annie Jr”, which opened on February 26, 1999. Wampler retired from teaching public school a year or so later; with the JFH middle school Choral Director position only being a part time contract, it took until 2017 for JFH to have another person on staff with the background, time and desire to stage another musical. In 2017, Jen Payne with Jessica Strawderman, and then Alissa Romano (with Strawderman) directed a series of very successful shows. It became clear pretty quickly that the Musical Theater program was here to stay. Student teacher Jenny Woofter took careful notes, as she worked alongside Strawderman.

Woofter now has an advantage over her predecessors, as 2022 brought the expansion of the Choral position into full time Choir and Musical Theater Director. We are excited for all the opportunities the full time status will allow for the kids in both Choir and in Musical Theater. With the pandemic waning and time now on her side, Woofter chose to bring “Annie Jr” back to the JFH stage. Here is what Woofter has to say about directing the musical “Annie Jr.” this year:

“This year in particular means a lot because it is a “first” for so many involved – my first time stepping into the role of director, the very first musical ever for all of our 6th and 7th graders (as well as for many of our 8th graders), and the first time we have expanded the scope of the musical experience to include not just our 42 cast members but another 40 student crew members. Our crew includes student managers and groups helping with jobs such as moving set pieces on and off stage, lighting, sound, hair, makeup, costumes, selling concessions, and much more. We have students actively taking part in developing the choreography for our show, sharing ideas for advertising and social media, putting together costumes, and so much more. The collaborative nature of a project such as this helps students to think creatively, work with others, and take ownership of what they are creating in a really practical, tangible way. The schedule and scale of the project also helps teach them responsibility, accountability, and time management as they balance participation with their schoolwork and other extracurriculars and commitments. We are so excited to give JFHMS students this opportunity to explore some of those things, while also having a lot of fun!” 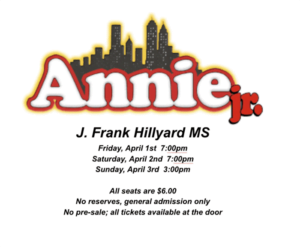 “My philosophy is that the musical should be a place where 6th, 7th, and 8th graders who may never have had the opportunity to meet otherwise can come together in a welcoming and fun environment and have a positive experience being a part of something bigger than their everyday activities. My best friendships in middle, high school, and college developed out of musical experiences. I even met my husband at an audition for a musical! I know what a wonderful place it can be to cross these invisible social lines that somehow can get formed between students in different grades and students from different friend groups or walks of life, and breaking down some of those lines and getting the chance to give that to our JFHMS students means so much to me. Everyone is welcome, no previous experience is necessary, and we all support each other both in musical and outside of musical. We’ve started a tradition this musical season where every day when we end rehearsal, we give the opportunity for students to raise their hand and give a compliment to a fellow cast or crew member who deserves recognition for the work they did that day. It’s heartwarming to see the hands shoot up, not just for the students playing lead characters, but for ensemble members and crew members, as well. My hope is always that the students leave these rehearsals feeling proud of what they’ve accomplished and supported by their friends.

So many of our middle school students find a “home” within the music department, either in Band, Choir and now also in Musical Theater. The family atmosphere in these programs becomes a support network that lasts through graduation, and even beyond. Ironically, there are parents involved in our Annie Jr. parent network, who were members of the 1999 JFH cast production of Annie Jr. Theater Mom, Rachel Andes Herrick is the mother of our Stage Manager, Ivy Herrick. We even had a donation of a 1999 poster and T-shirt from another parent a couple of years ago, who was a member of our original Annie Jr. cast. (sorry I can’t remember who–if it was you, please reach out to remind me! cbrown@rockingham.k12.va.us) It is such a cool thing to have a second generation of cast members involved, the legacy continues!

Don’t miss The JFHMS production of “Annie Jr.” on April 1st and 2nd at 7:00pm, and April 3 at 3:00pm. All tickets are general admission, and for sale at the door only.

PLEASE JOIN US! Proceeds from tickets and concessions will benefit our Musical program–please help us cover the cost of costumes and props for this year, and help us to ensure that the JFHMS Musical tradition will continue in the future.