As a successful 2022 season comes to a close in early December with the production of A Christmas Story (see our ad in this month’s Chimney Rock Chronicle), The Off Broadway Players recently announced their 2023 season of theatrical productions, pending approval of production rights.

Kicking off the season in May 2023 will be Steel Magnolias. Written by playwright Robert Harling, the play is based largely upon his own personal experiences involving the death of his sister due to complications from diabetes. Set in a beauty parlor in a small town in Louisiana, six women gather there every weekend where they visit and gossip as hair is done and nails are painted. Shelby’s wedding, marriage, pregnancy, and medical issues take center stage. Steel Magnolias is a marvelous combination of verbal sparring, hilarious repartee, poignant heartbreak, and underlying strength that makes it relatable to our own lives. The six women show love, humor, perseverance, and solidarity in good times and bad. Directed by Jeff Obenshain, The Off Broadway Players production of Steel Magnolias will be performed on May 12, 13, 19, & 20 @ 7:00 p.m. and May 14 & 21 @ 3:00 p.m.

Walking Across Egypt by Catherine Bush hits The Off Broadway Players’ stage in July/August 2023. In this comedy/drama, directed by Ron Smith, Mattie Rigsbee discovers a stray dog on her back porch and decides she’s too old to keep a pet and calls the dogcatcher. Little does she know that the dogcatcher, Lamar Benfield, will open her eyes to a whole world she never knew existed – a world that includes car theft, prison breaks, and a juvenile delinquent named Wesley who is as desperate for a family as she is. Armed with only her mouthwatering cornbread and a deep abiding faith in the Almighty, Mattie is determined to woo Wesley to the side of God and good Southern manners . . . if she can just manage to stay out of jail herself. Walking Across Egypt will be performed on July 28 & 29 and August 4 & 5 @ 7:00 p.m. and July 30 and August 6 @ 3:00 p.m.

Following up on the heels of Walking Across Egypt, The Off Broadway Players will be offering an introductory class on comedy improvisation for interested adults. Led by Michael Strawderman, this class will introduce participants to the foundational rules of successful improvisation through a series of fun and engaging workshops that will culminate in a Whose Line Is It Anyway?-style performance before an audience. Class and performance dates will be forthcoming early next year.

The Off Broadway Players’ 2023 season wraps up with a production of The Best Christmas Pageant Ever directed by Terri Hoover. In this hilarious Christmas tale written by Barbara Robinson, a couple struggling to put on a church Christmas pageant is faced with casting the Herdman kids – probably the most inventively awful kids in history. Mayhem and fun ensues when the Herdmans collide with the Christmas story head on! Featuring many local Broadway youth, The Best Christmas Pageant Ever will be performed on November 10, 11, 17, & 18 @ 7:00 p.m. and November 12 & 19 @ 3:00 p.m.

The Off Broadway Players thanks all who have supported us throughout the 2022 season by attending our productions and look forward to bringing the Broadway community another exciting year of theatrical performances and opportunities in 2023. For more information on our organization, audition and performance information, and how you can get involved either onstage or “behind the scenes”, visit our website at www.offbroadwayplayersva.org. 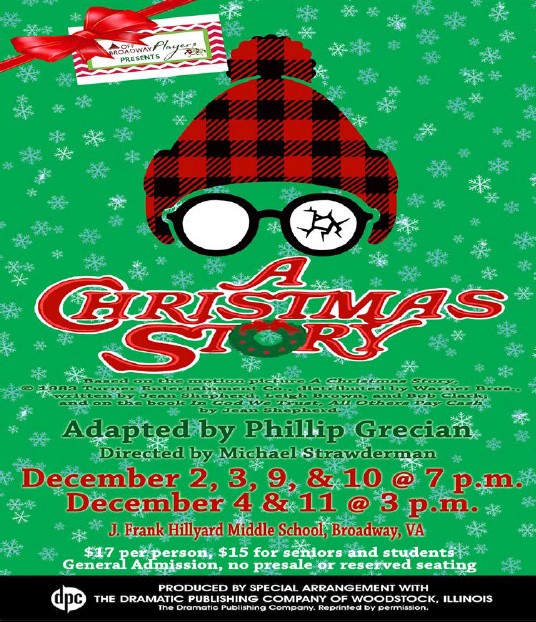