The Midnight Ride of Paul Reve …the Moose Hunter 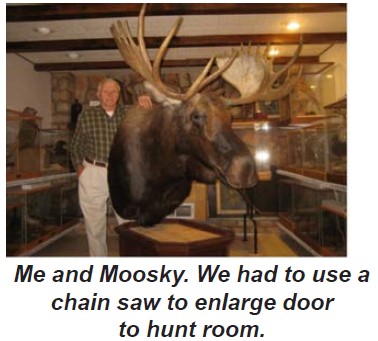 It was 11:00 p.m. and I and (let’s just call him Paul) my hunting companion were sitting in our hunting cabin getting ready to go to bed because tomorrow was moose season in Alaska. We were going to hunt Alaska Yukon Moose the next day and the subject got on our heart problems. Both of us have heart problems. I had just recently had a quadruple open heart surgery operation. I noticed him sitting there wringing his hands and acting uneasy. I remember him asking several questions about if I ever used the nitroglycerin pill they give you in case you think you are having a heart attack. I told him that I had never had to use any, but I carried them all the time with me. He said, “I don’t think I am feeling well”. I ask him if he wanted one of my pills and he said he didn’t. We sat there a few minutes longer and as he rose from the chair he said “I think I had better get to the hospital in Fairbanks. Wow! That was a mouthful. How!? We were 15 mi. from the main road across the Alaska tundra by 4-wheeler at 11.30 at night.
It was about 11:30 p. m. and pitch dark. We were in such a rush to get moving the only thing I remember was hearing a wolf howl in the distance. I got my coat and hat on, forgetting my gun, something you never do in Alaska. I was using a Mod 700 Remington XCR, cal. 338 Rem Ultra Magnum, yes, a big one, and left it hanging on the wall in the cabin. Never thought once about meeting a grizzly with a sore butt. So we jumped on our 4-wheelers and took off.

Also, I was not used to running a 4 wheeler let alone in pitch blackness. I had never operated a 4-wheeler before except getting to the cabin. The territory between our cabin and the highway were full of deep gullies and the worst obstacles were the three bottomless mud areas you had to cross. When going to the cabin we got stuck in all three. You have to have one 4-wheeler to pull the other one out.
When coming onto a gulley your headlights would shine across leaving the bottom in the dark. You wouldn’t know what was in the bottom until you started down, by then it was too late if you did not want to continue.

We got to the parking lot at approx. 3:00 a.m., loaded the two 4 wheelers on the trailer and headed north to Fairbanks, with me driving. All the way up the road we saw spectacular displays of the northern lights. None like I had ever seen before. I would have liked to have photographed them but there was no time for that.

We got to the hospital at approx. 5:00 a. m. His wife was there waiting as we had called her earlier. She went in with him as I stayed in the truck to get a few winks.

They emerged at about 6:30 from the hospital. Everything checked out O. K. False alarm.

We went on to his house and slept until about 3 p.m. We then headed back to the cabin. We hunted all the next day and for 3 more days without seeing a moose big enough. 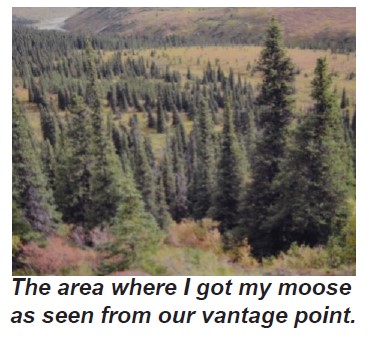 The next day I saw my moose for the first time. We were on this ridge where we had been since getting back in moose country. When we first saw him, we couldn’t believe he got to that spot without us (2 people, 4 eyes) seeing him. He was thrashing the black spruce trees with his big antlers trying to remove the velvet. After a while he began moving away from us. It was time to get down from the ridge and try to head him off. We rushed to where he should be and on us coming out in a little clearing, we saw him. Huge! He was broadside to us and he turned his head to the right to look at us. All I heard was “Shoot him”. I rested the .338 R.U.M. on a limb of a small spruce tree and centered the crosshairs behind his shoulders and putting a little more pressure on the trigger and …BOOM! The gun erupted. Oh No, he didn’t move! I couldn’t have missed, as big as he was. He was only 208 yards away from me. I hurriedly bolted another shell into the chamber …BOOM! Still no movement like he was hit. I couldn’t believe it. That is a big gun. That gun has a muzzle energy to equal a .375 H & H Mag. I bolted another round in the chamber and again fired…BOOM! We stood there in amazement for a few seconds. Then I remembered reading a story a couple of years before in a hunting magazine about something. Moose sometimes keep standing on their feet after their brain tells them they are dead. I didn’t see any need to shoot him again. The shells are too expensive, $2.75 ea. at last count. I might need them later to save me from a grizzly. Before the thought got out of my head, we started to see his rear slowly starting to fall. Since then, I have heard of that same thing happening two or three different times.

On butchering him we saw the bullet holes. All 3 shots were in a 6 in circle right where I was holding. That moose was dead on the first shot. That’s why he didn’t move. The gut pile was huge. A lot different than field dressing a deer. It took two people to lift a hind quarter up on the 4-wheeler. I am told Alaskans only take the four quarters of a moose leaving the rest for the bears, foxes, wolves and wolverines. I don’t know what the Eskimos do.

We were very fortunate to shoot him at a place where he could be reached with the 4 wheelers. I would hate to have to carry him (1700 lbs.) very far. Getting the horns to Virginia was a fight in itself in the lobby with Alaska Airlines in Fairbanks. Another short story, maybe sometime. I will try to remember this when I run out of stories. When my computer crashed last summer, I lost most of my moose hunting photos. The few that I had printed on paper is all that I have.

I have to stop, my story is getting long enough, see you next month. John