How many of you recall the commercials – Ding Dong, Avon Calling! or the phrase – Whatever you wear, wear fragrance by Avon?

Founded in 1886, as the California Perfume Company, David McConnell was a traveling book saleman. His gifts with purchase were beauty products and perfumes. When he realized that his customers were more interested in his samples than buying his books, California Perfume Company was born in NYC. He concocted perfume samples himself, and recruited women to be his first salespeople. He believed in women, long before they had established rights of their own.
|
As the years progressed, the company managed to change with the times. The Avon name was first used on products in 1929, with the company changing its name to Avon in 1939. Commercials ran on the black and white TVs of the ‘50s and ‘60s – with a familiar ring – Ding Dong, Avon calling!! Their commercials appealed to a wide variety of consumers, with models in peignoirs or glittering evening gowns for the elite or older customer, to psychedelic Carnaby Street models reaching out to the younger, hip generation of that era!

Believe it or not, there are still dedicated Avon users today. Remember Skin-So-Soft? First launched in 1961- it is still a popular item.

You can find Avon catalogs here and there, and a lot of people go online nowadays to purchase. But did you know, there is an Avon brick and mortar store right here in Broadway??? Very few remain, because you have to be a licensed Avon Beauty Center, and those are few and far between.

As you turn at the traffic light near the railroad tracks and turn on to Main Street in Broadway, the brick building on the left houses Sharon Moyers’ Valley Avon Beauty Center, LLC. Right next door to New Era Beauty Salon, her Avon shop carries many of the popular catalog items, including the jewelry. If Sharon doesn’t have it in the store, she will order it for you!

Sharon and her husband Tom are the store owners, Originally, they were in the brick building on Mason, opening their business in 2009. They have been at the present location since 2013. 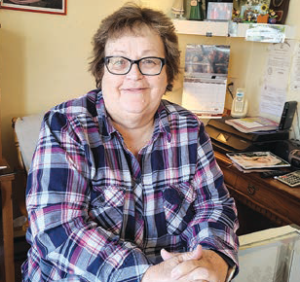 Sharon worked for Good Printers in Bridgewater for 15 years, then Liberty Press in customer service for 9 years, Her mom and dad watched the store while she worked at Liberty, and Sharon worked the shop on the weekends. When Liberty closed 5 years ago, she was at the shop full time.

There is a resident greeter in the store, a beautiful grey cat named Stella. Sharon rescued Stella from the street (there was a story about Stella and other Cats of Broadway in a previous issue of the CRC). Stella, at 14 years old, is the official shop cat, “supervisor and security” as Sharon says, and takes her job very seriously, following the customers around. Unless, of course, it is nap or grooming time! Stella has her own fan club, including a gentleman customer who comes from Staunton. Sharon jokes that she thinks he really comes just to see Stella!

When asked about the old door to door Avon style of selling, Sharon said, “They just don’t have anybody to do it anymore. The younger people just want everything online, so there are just not too many representatives going around anymore.”

In order to have an Avon storefront – you have to be a licensed Avon Beauty Center, which Sharon is. Avon is not doing any more of those, that Sharon is aware of. The few that are licensed are allowed to remain in business, but there are no more stores being opened. There is a licensed shop in Winchester, and a few others across the country.

The Avon Company sold part of their business to LG Health, so you can find additional products in the Avon catalog, such as batteries, bathroom and floor cleansers, stain removers, and laundry detergent.

There are as many products in the store as she can carry, except for the clothing line. It is too difficult to have all sizes in stock. But Sharon gladly orders whatever is in the catalog that she may not have in stock. Customers can also go online themselves to place an order, and use Sharon’s name as their representative, so that her store gets credit for the order.

If the brochure is having a sale, Sharon will match the catalog sale. Her catalogs can be found at J&B’s Country Store, New Era Salon, and other places around town, as well as in her own store.

Sharon puts an order in every other week, and on occasion, as with other businesses these days, there may be a delay in a particular order. For the most part though, she keeps everything stocked and on the shelves. Along with orders, she will deliver within a 20 mile radius.

Her busy times are from the first of December through mid January. If you plan on ordering for Christmas, Sharon will be putting in orders. The last order going in that will guarantee before Christmas delivery is December 9th. Her other orders are November 11th, November 25th, and December 9th. If there is something you really have your heart set on, as with anything else, order early, to make sure they don’t run out!

Although people come from as far away as Elkton, Staunton, Harrisonburg, and Bridgewater, many people are unaware that this little shop even exists. Maybe, after this article, that will change. It is a great little store. 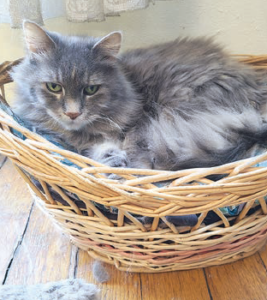 Sharon and Stella, her sidekick/greeter/security cat, are at the store Tuesdays through Fridays -11am until 5pm. Closed Saturday, Sunday, and Monday. Look for the little pink Avon sign at 213 North Main Street, Broadway. Valley Avon Beauty Center LLC can also be found on Facebook. Phone number is 540-896-2114